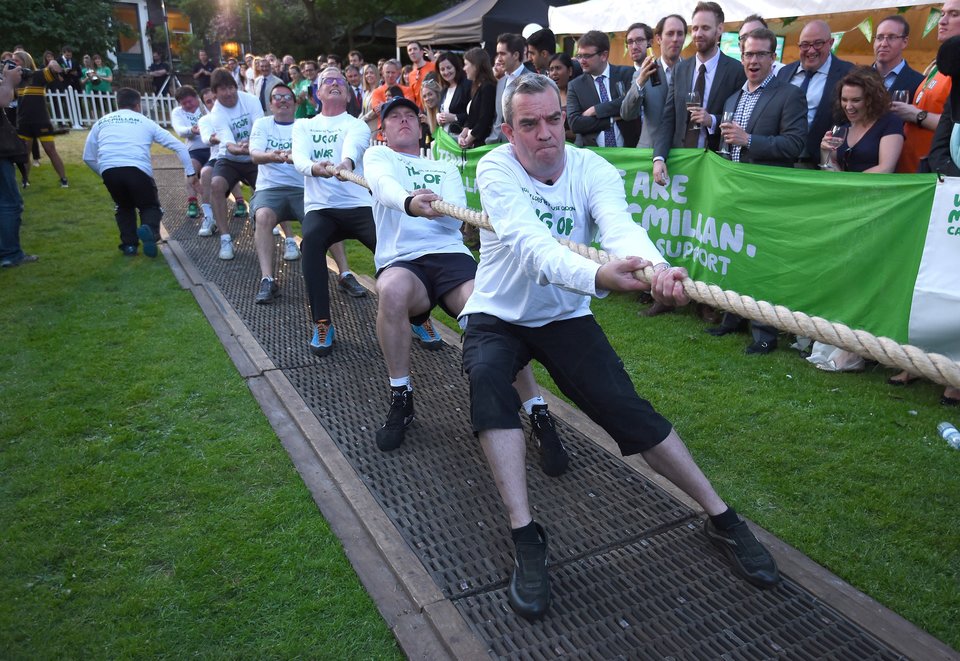 The annual Macmillan’s House of Lords vs House of Commons Tug of War was held on the 6th of June this year, at the Westminster College Gardens. Over £113,500 was raised for Macmillan Cancer Support, with a total of 10 Tug of War matches being held between rival teams such as RAF vs Army, the fire services, industry giants and city firms. But the highlight of the evening was the Tug of War between the House of Lords and the House of Commons, and which was preceded by the Tug between female MPs and the Macmillan Ladies team. The Commons men were led by MP Mike Penning and the Lords men by Lord Bilimoria and Lord Paddick, whilst the team of female MPs had Dr Therese Coffey at the front of the rope and Kelly Tolhurst at the back.

Light-hearted banter was exchanged between Lord Speaker Baroness D’Souza and her counterpart in the House of Commons before the start of the event, in keeping with the tradition of friendly rivalry. The Baroness wryly asserted in her opening address, “Let no one think the House of Lords is too old and doddery to win. They have won once”, and Speaker of the House of Commons, Rt Hon John Bercow MP, was quick to respond with, “It is perfectly proper that Lords win again, but not here, not now, not tonight!”

Having won every year in a row except one, it was no surprise that the House of Commons MPs heaved their way to victory once again this year, albeit murmurs amongst the crowd that perhaps the MPs were grunting “Leave!” as opposed to “Heave!” in lieu of the upcoming EU referendum on June 23rd.

Richard Taylor, Director of Fundraising, Marketing and Communications at Macmillan Cancer Support said, “The winning medals for Macmillan’s Parliamentary Tug of War were as fiercely fought over as ever before in this, its 30th anniversary year.  The night was a fantastic success with politicians from all sides of the Commons and Lords really pulling together for the benefit of people affected by cancer. The incredibly generous donations from the spectators alongside some good-natured political heave ho will go a long way in helping Macmillan ensure that no one faces cancer alone.”

Aside from the Tugs, guests were able to enjoy a champagne and canapés reception in the Gardens, with three piece folk act Ze Trio playing lively folk classics to keep spirits up throughout the evening. BBC2’s Jeremy Vine acted as Host and Match Commentator, making astute observations such as, “We’ve got all the political parties here – Labour, Lib Dems, and both Conservative parties.” His running commentary kept the event moving and the guests entertained between Tugs, and an anecdote from his interview with PM David Cameron earlier that day was particularly memorable, as he recalled that the song  ‘Should I stay or should I go’ by The Clash was ironically played immediately after Cameron left (unintentionally of course – or so he said).

Although Macmillan CEO Lynda Thomas stated in her opening address that the annual Tug of War is, “our most eclectic, strange and bizarre event”, this is perhaps the very reason it has become the sporting highlight of the parliamentary calendar. As James Landale, Deputy Political Editor for the BBC so aptly put it, “You can sip cold champagne while MPs and peers get hot under the collar. What is there not to like?”

Match 1 – Clash of the Cadets

Match 7 – At Your Service

House of Lords vs House of Commons