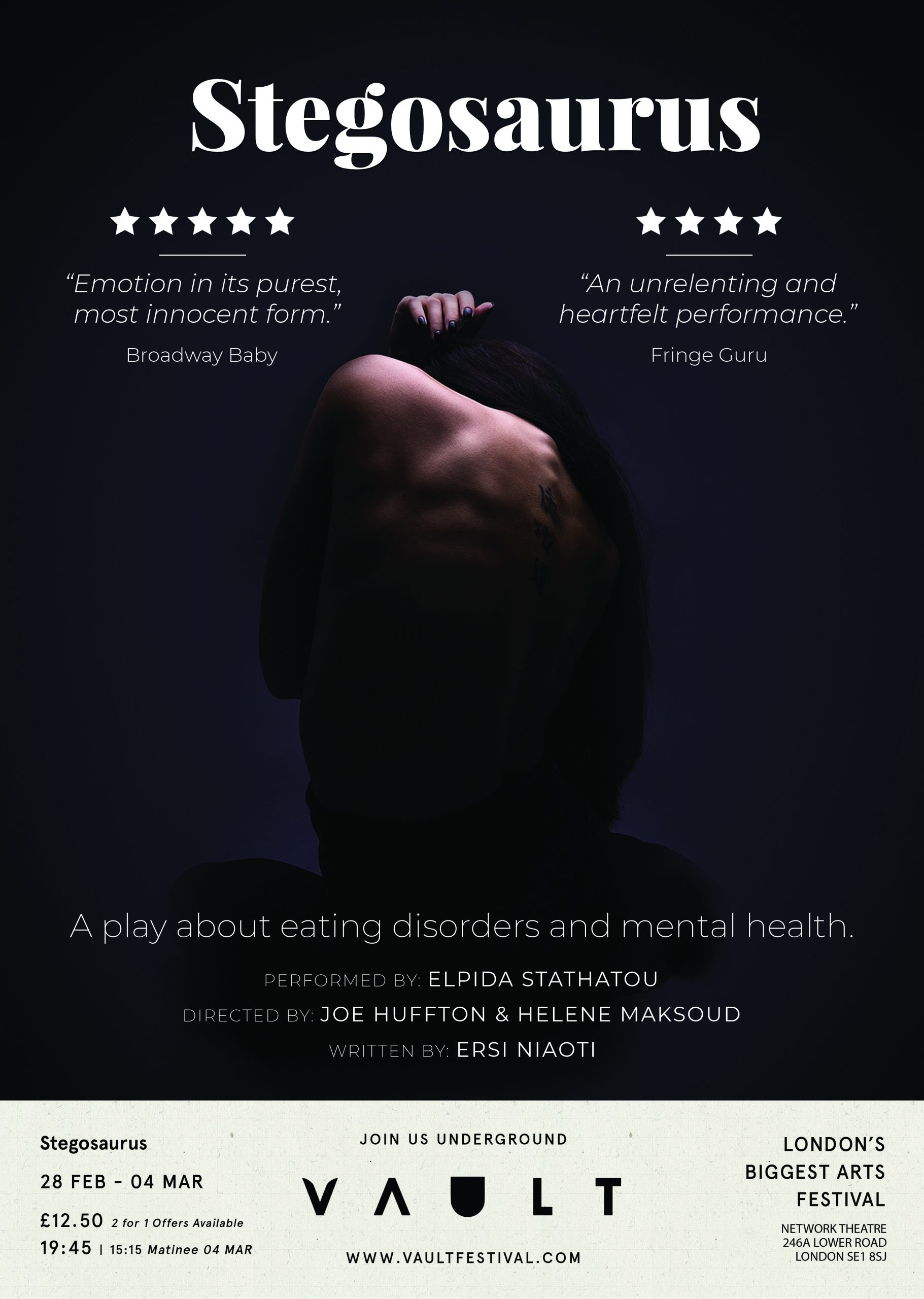 “Stegosaurus”: a play about eating disorders and mental health at the VAULT Festival

Described as “emotion in its purest, most innocent form” from Broadway Baby and a “powerful drama” by The Sunday Times, “Stegosaurus” is a one-woman performance seen as a vivid exploration of mental ill health that everyone can relate to. Based on the personal experience of playwright Ersi Niaoti, Stegosaurus focuses on the experiences of a 30 year old divorcée who slides between bulimic binging, anorexic starvation, drug misuse, emotional abuse and rough sex. Elpida Stathatou, the star of the play, who has travelled from Edinburgh (Edinburg Fringe Festival), speaks exclusively to the Beaver about her performance and feelings about this promising project. The Greek actress talks about her thoughts on anorexia and its implications and explains what inspired her to be a part of this story. Finally, she shares her feelings about the Arts in general, as well as her decision to follow her childhood dream and become an actress…

“Stegosaurus”. What are the intended connotations of the title?

It’s very hard to answer this without giving away many spoilers, but Stegosaurus is a creature very famous for the distinct bones in its back. This is as far as I can go, but I promise that it will make sense by the end of the play.

The play is a woman’s journey through her everyday life. What is it that makes this journey inspiring and electric for the audience?

After my research and having discussions about suffering from eating disorders with many different people, I can confidently say that for the most part the play is not about food, but about feelings and how we handle those feelings. Being overwhelmed and losing control of your life, due to any mental illness, is something that everyone can relate to, to some extent. Bringing yourself face to face with the honesty that this fight requires, even as a viewer, is, in my opinion, the most inspiring part of the play.

Anorexia is considered by some as an epidemic in the modern society of the deification of the external image. How is anorexia described in this play and what inspired you, as an actor, to be a part of this story?

Anorexia is described through the experiences of the writer, a 30-year-old woman, who is suffering from both anorexia and bulimia and who has moved back in with her parents. Looking at the manifestation of these illnesses throughout the play, one can understand how it can take control of one’s thoughts and subsequent actions. Personally speaking, from the moment I read the script I knew that I wanted to share this story. It was an incredibly powerful story, which I intended to use as an antidote to this exact issue that you described, the “glamorization of eating disorders” and the fashion industry’s distorted image of how women should look like.

The play was described by “The Stage” as “a form of therapy in itself”. What is your comment on this?

Very smart and accurate. The play will immerse the audience in a world of mental struggle, self-loathing, humour and hope, which I believe is a very authentic expression of the real life. This exposure can be very therapeutic for the audience, as it can connect them with their feelings about similarly problematic situations.

“Stegosaurus” is a one-woman play. What challenges are there with being the sole performer in a play? Is there something, in particular, that captivates you in this form of art?

Being alone on stage is always more challenging and terrifying – there’s no one there to “support” you at any point. At the same time, however, this can create a magical connection with the audience. The honesty of the story is what really captivates me in this play and I have the feeling that it is what captivates the audience as well.

When you turn a good honest story into theatre, you can feel it lighting up the hearts of both the performers and the audience. Stories like Stegosaurus are the medium I use to inspire and touch others.

Some say that ‘life is a stage of continuous conflicts and anxieties for survival’. As an actor, do you find the stage to be a platform for suppressing or expressing personal anxieties one may have? Is it helpful?

I believe that art is probably one of the best platforms through which we can express and confront our anxieties, both for audiences as well as for professional artists. Connecting to a story and its themes can make you evaluate and improve your life, which can be of tremendous help to each and everyone of us.

How do you feel when confronted with an audience, especially when starring as the sole performer?

The audience has such a strong impact on the performance that it can totally redefine the way it unfolds and ends up. It is a live connection that takes place during every single second of the play. The way people respond to it can differ so much and it can create incredibly interesting dynamics. Being on the stage for the whole duration of the play and observing their reactions is really magical and overwhelming at times.

Was there one determining factor that most influenced you to become an actress? Was it a childhood dream or something that emerged later on?

I always knew that I loved the Arts, whether it was dancing, painting or watching theatre, but my desire to become a performer was not something that I felt comfortable to express as a kid. At the moment I went in class for my first acting lesson, I felt such a strong connection to the theatrical process, that I instantly decided that this was what I wanted to do! And I never looked back…

What are your plans after the Vault Festival?

As an artist you always need to be on the lookout for the next project and I must admit that there are some interesting ones that I am discussing both in theatre and cinema, but for the next few days all this will be put on a temporary pause. VAULT is a very demanding and intense experience, so I want to focus on delivering the best possible performances I can!