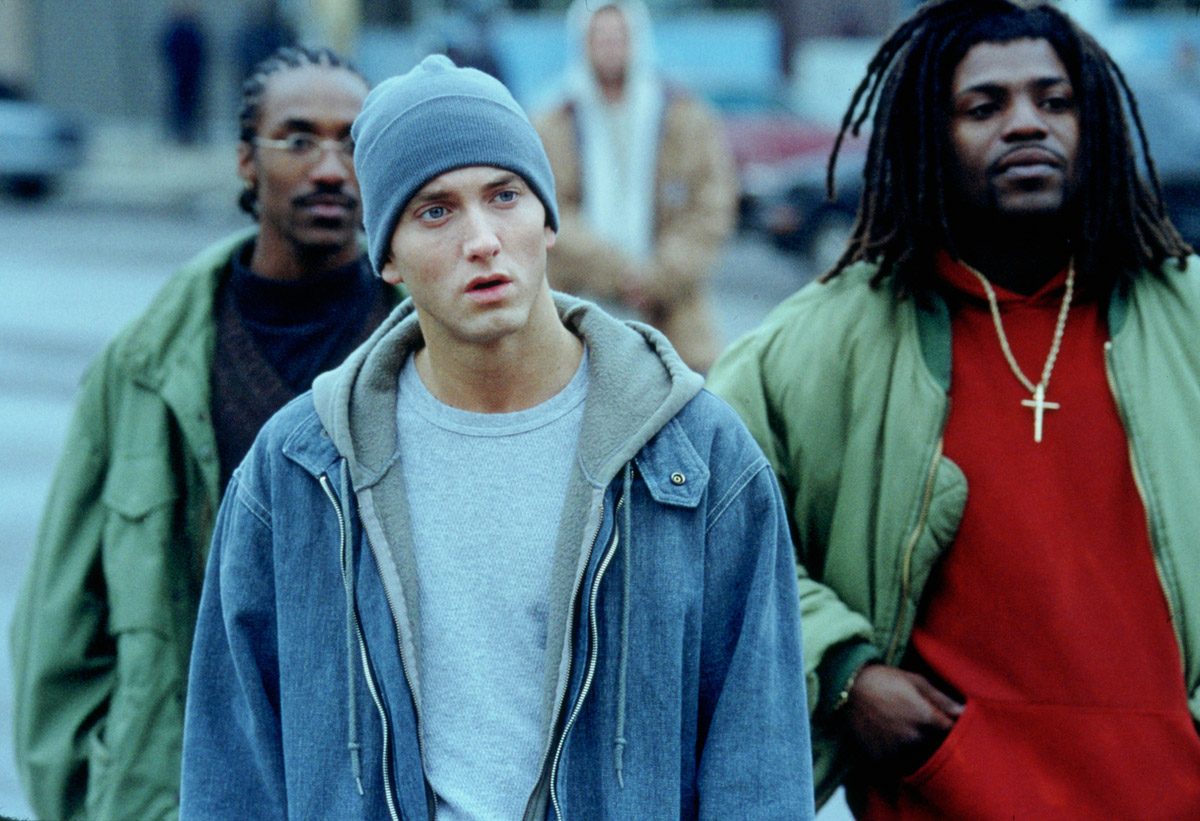 Stop being so fucking weak!

A rapper. A ballet dancer. A boxer. While very different in many respects, the protagonists of ‘8-Mile’, ‘Black Swan’ and ‘Rocky’ display strikingly similar character arcs. All go through the process of self-overcoming in learning to assert their ability, and in turn, themselves.

In studying these characters’ progress, we learn more about our own journeys. Whether pursuing romantically or revising frantically, any goal-striving is manifested through this path; one that traces us all the way from weakness to catharsis. This is the Hero’s Journey.

Weakness, desire and need form three of the fundamental building blocks of any great story and form the bedrock of its beginning. As our three films are just that, these blocks are clearly manifested within them:

In an interview regarding character development, John Truby alerts us to a central feature of a protagonists arc: if “you don’t establish something that’s deficient in your main character, no growth can occur.”

Weakness is exactly this; the deficiency that holds your protagonist back at the outset of your work. In the beginning of all three films, each protagonist displays a similar weakness: an inability to assert oneself professionally, and socially.

B-Rabbit is portrayed in 8-Mile’s opening rap battle as unsure of himself, choking against his opponent. He is subsequently booed off stage.

Nina is a shy outsider, who, as a ballet dancer, is unable to master half of her performance for Swan Lake. This half is the Black Swan- a role that needs passion and power- two traits Nina lacks.

Rocky, like Rabbit, is put down by everyone, and is even more lonely than Nina, speaking to his own pets and pictures of his family. Like both, in his professional world he has succeeded little. Rocky’s social and material situation reflects this failure.

Desire naturally springs out of weakness. We desire what we don’t have. Desire forms the ‘spine’ of a story; giving it its drive and point of reference as a character progresses towards their goal.

Desire is primarily external. B-Rabbit aims to win the shelter’s underground rap battle tournament. Nina wants to dance the Black Swan perfectly. Both of these characters hold their desires from the outset of their films. In contrast, it takes the inciting incident of Apollo Creed’s manager asking Rocky to fight, to give Rocky the desire of becoming heavyweight champion.

Whilst often being inherently positive, achieving one’s desire often only papers the cracks over a deeper, hidden need. You desire the high flying job to prove to dad you’re not the failure he always said you were, you desire the ripped physique because you need validation from others.

Need is internal. It is the only thing that can lead to fulfillment. It’s centrality to our success is irrespective of whether we achieve our external goal or not.

As the first half of each film progresses, we see weakness, desire and need shape our character’s arc of change. This development from beginning to middle sees a greater awareness of need, though with weakness always prevailing. It is only until the Midpoint Reversal, that we see our character’s begin to shed their old selves, and begin to fight their weakness away.

The midpoint reversal is central to developing a hero’s journey- propelling a protagonist into the second half of their story. K.M Weiland describes the midpoint reversal as when “the character’s response is no longer just a reaction…he begins to definitively take charge of the story and act.”

The screenwriters of 8-Mile capture this psychological flip perfectly in B-Rabbit’s midpoint reversal. Rabbit’s first rap battle sees him choke and his second sees him hesitantly enter against rival rap group ‘The Free World’. Then his third, occurring directly at the halfway mark, sees him dive directly into a contest, winning the battle and ridding himself of parts of his chocking persona. Though Rabbit’s only done half the job. We still don’t know if he will fulfill his need and perform when he gets his ‘one shot’ at the rap shelter.

Rocky, having already gone through an embarrassing interview regarding his upcoming fight against Apollo Creed, is put to the test by his friend Paulie, the owner of a butchery. Through beating Paulie’s pig carcasses to a pulp, Rocky turns what could have been an embarrassing moment into a showing of grit and determination.This flip from reaction to action is encapsulated by the famous scene where a running Rocky reaps the rewards of the beautiful Chicago sunrise. Though, akin to Rabbit’s reversal, we don’t know if Rocky will achieve his desire and fulfill his need when his fight comes.

Nina’s midpoint reversal comes about in a series of scenes upon the introduction of her antagonist; Odile. Odile is the antithesis to Nina; vivacious and teasing, she dances with an imperfect, untamed style. Upon Odile’s arrival we see Nina immediately start adopting more assertive traits: arguing with her manager, chastising Odile and directly opposing her mother. This is where Black Swan differs from ‘8-Mile’ and ‘Rocky’ in a key way. We see Nina desire for perfection take a dark turn. Unlike Rabbit and Rocky her journey is one of destruction as much as salvation.

‘Catharsis’ in Greek means ‘throwing up’. It is a purging moment in which the central character finally faces their weakness head on, overcomes it. Thus they fulfil their need, whether or not they achieve their desire. Otherwise the protagonist becomes doomed to repeat their same mistakes again and again.

Rabbit does the former. Reaching the final rap battle against Papa Doc, Rabbit is reminded by his friend Badger that Doc’s knowledge of his past will make it extremely hard to win. In a masterful attack, Rabbit turns all these surface weaknesses into a deeper onslaught on Doc, destroying the latter’s credibility as a rapper: “this guys no mutherfuckin’ MC/ I know everything he’s got to say against me.” Rabbit shows that one’s weaknesses don’t characterize them; for only actions cement one’s character. Doc becomes silenced, just like Rabbit was during 8-Mile’s beginning.

This psychological overcoming is vividly present in Black Swan. Before changing into the Black Swan, Nina kills her hallucinated double; in fact mortally wounding herself. This is representative of Nina’s final destruction of the psychological subsystems within her that previously construed all her restrictive, passive weaknesses. But as seen in her midpoint reversal, Nina’s change is too sudden. In going full throttle towards her desire Nina fails to learn that need can only be achieved during a gradual process of transformation, and thus she falls.

In contrast, Rocky doesn’t manifest an outward win at the climax of his journey. On the surface, Rocky loses to Apollo. However, in the process, Rocky puts in the greatest performance he has ever undertook, fighting with the assumption that he is going to win. By the fight’s end Rocky has not only gained self respect but cemented the love between him and his girlfriend Adrian. The final line of the film- ‘I love you Rocky’- doesn’t encapsulate a will to victory at all cost, but the human togetherness that comes about due to the mutual striving for personal fulfillment.

Making our own Journeys

Stories map human change. The reason why 8-Mile’, ‘Black Swan’ and ‘Rocky are such great films is because of their hero’s journeys: exploring both the psychological and moral ramifications of their protagonists transformations.

But while the intensity of rap-battling, ballet and boxing may seem distant from our everyday life, the hero’s journey and it’s structural components lie in plain sight. In any striving to overcome or better ourselves we are left with our own map of change:

Beginning– awareness of the problem.

Midpoint- awareness of the ability to overcome the problem.

Climax- the final overcoming of the problem.

Through telling and experiencing stories we learn about ourselves and how we can grow. A story can be as short as a vivid retelling of a day’s central moment or as long as epic tale of love and boxing redemption. What’s most important is that a story retains it’s central nature; that it has a purpose. Purpose, after all, is what makes us heroes.

PrevPreviousJHS: The Art of the Double Reversal
NextJourney to the Heart of StoryNext
On Key