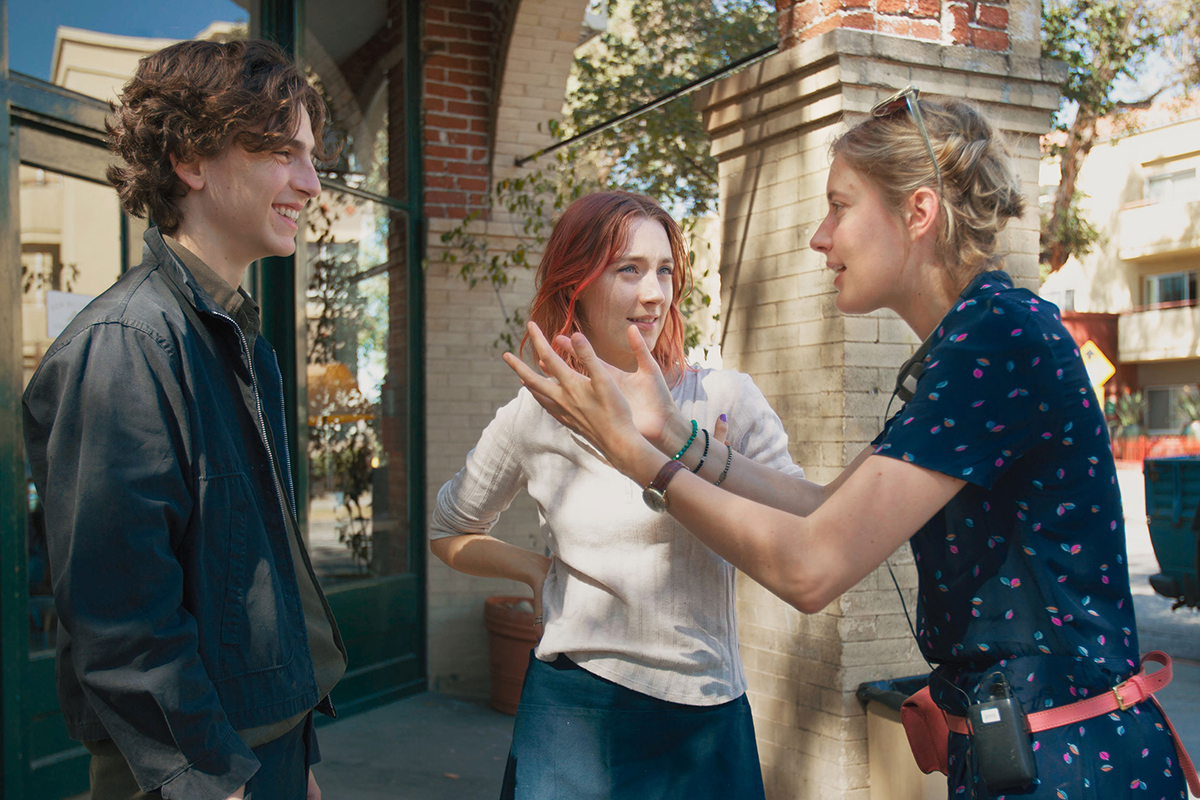 If Time’s Up, Hollywood Must Address Its Gender Imbalance

This weekend Hollywood will honour the best films of the past year at the 90th Academy Awards ceremony, but the composition of the nominees clearly indicates Hollywood’s problem with representation. Discounting the four acting categories for which the gender composition remains constant, only forty-two unique women are nominated this year compared to 143 men.

Guillermo del Toro’s The Shape of Water claimed an extraordinary thirteen nominations, but particular singular nominations drew the most attention. Jordan Peele became the fifth Black director to be nominated for the Best Director award and Rachel Morrison, for her work on Mudbound, is the first woman ever to be nominated for Best Cinematography. For her solo directorial debut Lady Bird, Greta Gerwig became the fifth woman ever to be nominated for Best Director in the Oscars’ long history. These are just two glaring indications that women aren’t given the same opportunities as men to express their talent.

From a data set of 2,591 films released between 2005 and 2014, an extensive report commissioned by Directors UK found that just 13.6% of working film directors in the UK were women. Across the observed decade, the proportion of UK films that had a female director increased by just 0.6 percentage points. It’s frustrating that apparently one of the most progressive industries still struggles significantly with representation.

Actress Jessica Chastain recently set up Freckle Films: a production company led by a team of female executives that was created to promote diversity in film. During a roundtable with The Hollywood Reporter, Chastain highlighted one reason why there are so few female filmmakers today. Agencies have sent Freckle Films lists of writers made up entirely of men. The reason why agencies do this is that men tend to have higher quotes, and the higher the quote for the writer, the higher the proportional payoff for the agency that submitted them.

Reese Witherspoon and Margot Robbie are among the latest actresses to also establish production companies with a focus on producing movies with strong female roles. It’s unfortunate that even today such measures still have to be taken to drag the film industry to a position of equal opportunity.

It is difficult to understate the consequences of this problem. The fact that the film industry is male-dominated certainly contributed to a culture that allowed sexual harassment and the mistreatment of women to go unchecked for decades. If Hollywood wants to ensure that time is really up for sexual assault, harassment and inequality in the workplace, then it needs to acknowledge and address the gender imbalance.

American research found that when women are in leading positions on film sets, society is better represented than when the set is male-dominated. This extends all the way to the composition of extras and what the extras are doing. Data from the New York Film Academy indicates that there is a 10.6% increase in female characters on screen when a woman directs a film, and an 8.7% increase when a female screenwriter is attached to the film.

But only a small proportion of Hollywood’s biggest projects are helmed by women. Last year Patty Jenkins’ critically and commercially successful Wonder Woman grossed $820 million from a $149 million production budget, easily outdoing many male-directed Marvel Cinematic Universe movies. Ava DuVernay’s A Wrinkle in Time, which is set to be released next month, is the first film with a budget above $100 million to be directed by a Black woman. It has taken an immense amount of time to get to this long over-due position, but hopefully these are just the first of many big-budget female-focused features to be directed by women. Joss Whedon’s recent departure as writer and director for the DCEU Batgirl movie provides a brilliant opportunity for Warner Bros. Pictures to hire a talented woman to replace him.

But this is, of course, not to say that women need to be restricted to films with a female lead or to any particular genre. “Inclusion in the Director’s Chair?”, a 2017 research paper conducted by the USC Annenberg School for Communication and Journalism, found that there was a stark contrast in the genres of films women were directing. Women were significantly likelier to direct dramas and comedies than science-fiction/fantasy and action films. This is particularly troubling because these latter genres tend to be the highest grossing in today’s film market. There is no reason why one’s gender should determine their talent in a particular genre. In 2010 Kathryn Bigelow became the first woman ever to win an Oscar for direction for her warzone drama The Hurt Locker, which features an entirely male main cast.

During the press rounds for Rogue One: A Star Wars Story, Kathleen Kennedy, President of LucasFilm and one of Hollywood’s most powerful women, was criticised for comments she made about the potential for a woman to direct a Star Wars film. Kennedy implied that she was waiting to find a woman with experience directing a blockbuster to be responsible for Hollywood’s most lucrative intellectual property. But if Colin Trevorrow and Gareth Edwards can go from directing films with budgets below $1 million to directing blockbusters with budgets in excess of $150 million (Jurassic World and Godzilla, respectively) then why can’t the same be said of a woman?

The aforementioned report by Director UK found that just 3.3% of films with budgets over £30 million have a female director. Directing films with higher budgets doesn’t necessarily correspond to career progression in the film industry, but this statistic provides one explanation for the pay gap between men and women.

Hollywood reboots and remakes are proving highly profitable today. Ghostbusters and Ocean’s 8 are two recent examples of high-profile female-focused remakes. But both were directed by men. How convincing is a film with the message of female empowerment when a woman probably wasn’t given the chance to direct it? Although film criticism is subjective, and the validity of such score aggregators is questionable, the Directors UK report also found that films directed by a woman had higher ratings from both male and female IMDb users than films directed by men. Similar results were found from Metacritic and Tomatometer scores.

The problem of gender imbalance has existed in Hollywood for far too long, and some creative solutions are necessary. It is an important step to decouple the connection between the gender of the lead character and the gender of the director. This way change can be created from the top down. It may become necessary for top actors, actresses, directors and major financiers to demand equality clauses in their contracts: they only sign on if there is evidence for equal opportunity and representation.

An interesting scheme that is being tested in Australia is pairing seasoned directors with new filmmakers in order to break the cycle of inexperience and limited opportunities. Brooke Goldfinch and Catriona McKenzie were paired with Ridley Scott during the production of 2017’s Alien: Covenant. Moreover, Ava DuVernay has teamed up with the Mayor of Los Angeles Eric Garcetti and film producer Dan Lin to start a public-private partnership that would fund 150 internships for women, people of colour and people from low-income households to help them get a break into the entertainment business.

As Barbra Streisand reminded us via Twitter after this year’s Golden Globes ceremony, she was the last woman to win a Golden Globe for direction. That was thirty-five years ago. To celebrate the female talent in Hollywood and to mark Greta Gerwig’s Oscar nomination, I thought it would be apt to review the five films nominated at the Academy Awards for Best Director which were directed by women.

Lady Bird hilariously explores the various relationships between Christine “Lady Bird” McPherson (Saoirse Ronan) and her friends and family, particularly her complicated relationship with her mother (Laurie Metcalf). The film spans Lady Bird’s final year in high school as she applies for expensive universities far away from her home in Sacramento, California, whilst her family struggles financially. Lady Bird considers a wide range of relationships with a sharp and snappy script that tells the story remarkably efficiently. Getting an audience to believe characters are real is a tough challenge, but Greta Gerwig makes it look easy. Good luck at the Oscars!

The Hurt Locker is a war drama that follows an American bomb disposal team in Iraq. The contrasting personalities of the three lead characters (Jeremy Renner, Anthony Mackie and Owen Eldridge) heighten already intense scenes. Handheld cameras and well-places zooms retain the rough and complicated action of a war zone on screen. This also makes it feel like a documentary at times, enhancing the reality of the drama. The Hurt Locker, for which Bigelow became the first woman to win the Best Director award, perfectly refutes the outdated expression that women can only direct other women.

Lost in Translation follows Bob Harris (Bill Murray), an aging movie star experiencing a midlife crisis, and Charlotte (Scarlett Johansson), a young college graduate disillusioned with her recent marriage, as their platonic relationship develops into an unexpected romance. Murray and Johansson’s contrasting onscreen dynamic was commendable, especially as their dissimilarities are observable in the settings of the film. Lost in Translation grossed almost thirty times it’s $4 million production budget. This was Sofia Coppola’s second feature film, for which she won the Oscar for Best Original Screenplay.

The Piano is a mid-19th Century period drama about Ada (Holly Hunter), who refuses to speak and prefers to express herself through her beloved piano. To fulfil her arranged marriage she is forced to move to New Zealand with her mischievous young daughter (Anna Paquin). Ada struggles to adapt to her new married life, especially as she develops complicated feelings for a local forester. Though period pieces aren’t for everyone, through the cumulative impact of its directing, cinematography and acting performances The Piano is a very well-made film.

Wetmüller became the first woman ever to be nominated for Best Director at the Academy Awards for her Italian language film Seven Beauties. It follows Pasqualino, who deserts the Italian Army during WWII and is subsequently captured by German soldiers and sent to a concentration camp. Through flashbacks it is revealed how Pasquilino came to join the army in a tale that ultimately discusses the lengths some take in order to survive. Seven Beauties delivers funny scenes through its foolish hero, but it is unsurprising that the entirety of the film doesn’t hold up today.