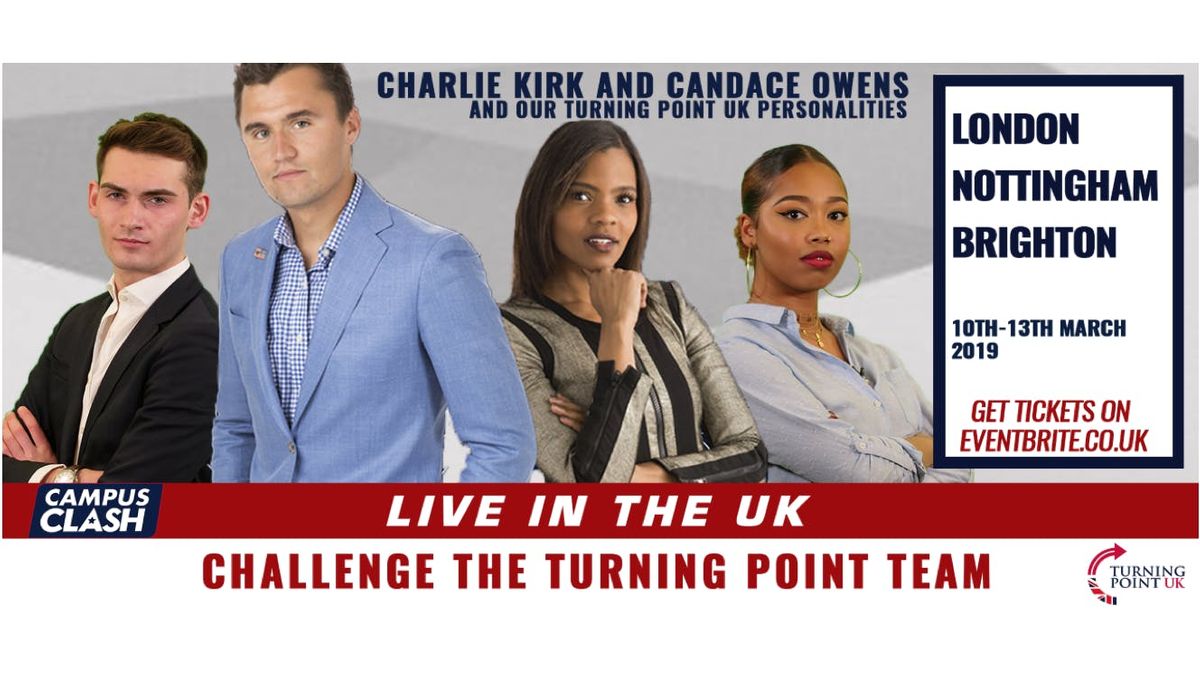 ‘Too West Wing for The Thick of It’: Why Young American activism keeps failing in Britain

After the recent false-start of Turning Point UK, Haydon Etherington and Adam Solomons look at why Britain’s young right-wingers have struggled to establish themselves.

Much like Aerosmith, imperial measurements and eating marshmallows with sweet potato, young conservative activism has failed to make the journey from the US to the UK.

The most recent example of a failed import is Turning Point, the right-wing youth movement, which has been mercilessly mocked upon its underwhelming British launch. No matter the efforts or vision of its founders, Turning Point’s shipwreck in the Atlantic was seen by many as inevitable. Can Britain’s taste for cynicism accommodate American sincerity?

Founded in 2012 as a self-professed bulwark against liberal culture and affirmative action, Turning Point USA have spearheaded campaigns such as #BigGovSucks and ‘Socialism Sucks’ (sense a theme?). Their work has amassed support from right-wing media outlets and campus groups alike, even drawing the none-too-equivocal backing of Kanye West.

In January, Turning Point UK was set up with the backing of several notable young conservatives, including Guido Fawkes journalist Tom Harwood. Within days, Harwood and others had distanced themselves from the project.

Shortly after their alt-left (and alt-right) bashing launch video, dozens of fake Turning Point Twitter accounts cropped up to mock the group. These parodies called for socialist revolution, posed as right-wingers drinking ‘liberal tears’ and squabbled with the official accounts about who was the real Turning Point. Anglia Ruskin’s local chapter featured adoring tweets about Ayn Rand quickly morph into support for Irish Republicanism; clearly the password needed work.

All this is a far cry from America’s more advanced – and pernicious – online ecosphere, where Turning Point remains a viable movement, pro-Trump content is churned out from Reddit’s ‘The_Donald’ and right-wing, libertarian culture brews in the forums of imageboard 4Chan. So why hasn’t young, online conservatism caught on in Britain?

Young Tories say it’s got something to do with Trump’s authoritarian demeanour, a far cry from the genteel manner of British Tories’ preferred champion, Jacob Rees-Mogg.

One member of LSE’s Conservative Society says, “Even though many conservatives in the UK consider themselves some strand of Republican, Trump either through his persona or language is often unappealing. Mogg speaks the political language of Britain.”

This sentiment is echoed by another senior member of the School’s Tories, who added, “UK conservatives don’t fight culture wars.”

“There’s been a trend of accepting society as it is […] which has depoliticised campus to an extent.”

Britain’s campus culture is a quite different game to that played across the pond.

Absent of the radical anti-state attitudes that characterise much of political debate among the American youth, right-wing British students have enjoyed rather than opposed the permissiveness of aggressively liberal campuses.

Much of this seeming acquiescence toward a changing society is the result of pessimism, both about the outcome of an anti-establishment revolt and its electoral viability.

“Tradition will always be important to conservatives… I think the two-party system is so engrained that it is utterly pointless to vote for anyone else in a general election”, one young Tory continue. He admitted sympathy to Ukip in the previous two general elections, but never voted for Nigel Farage’s populist outfit.

And where the US and UK diverge in politics, they also diverge in attitude.

Devoid from an American respectability, politics in the UK, Manavis curtly summarised, is “one endless piss-take”. Young politicos in Britain don’t feel the need to give Turning Point a platform for the sake of debate, nor is there goodwill toward disagreeable newcomers. Harsh ridicule is quite enough.

America’s polite willingness to engage with Turning Point has enabled its growing media profile: “It probably gets made fun of”, Manavis says, but “it is really successful”. It is the sincerity of America’s politics, and the culture of belittling it in Britain’s, which enabled Turning Point’s success in America and failure in the UK.

Even distinctly British right-wing youth movements have failed to grow beyond small cliques of politically active students. Activate, the ‘Tory Momentum’, collapsed after a very similar spate of online ridicule in 2017.

This well-documented history is not helped by the Conservative Party’s rather acrimonious relationship with its young members. Conservative headquarters disbanded their old youth wing ‘Conservative Future’ in 2015, only now beginning to re-establish a new organisation in its stead.

But as long as the mainstream Tory party houses MPs, such as Rees-Mogg, whose online content continues to motivate its young members, the desire for a youth wing of their own appears minimal. And its success, if were to be formed, looks to be stymied by British political culture. Either way, such a grouping would be unfashionable, confirmed by our struggle to get on-the-record quotes from potential members.

For now, it seems right-wing activism in the UK will continue to be a preserve of the older generation. Universities won’t be seeing a conservative revolution any time soon. Maybe all they need is a safe space.

PrevPreviousIs the UK really a leading example for Research and Development in the pharmaceutical industry?
NextFT’s Sebastian Payne Discusses Digital Media and the ‘Pugnacious’ British PressNext
On Key