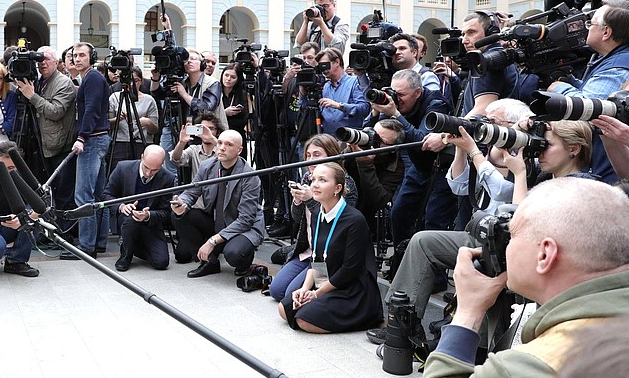 In the second part of our interview with Financial Times political writer and digital comment editor Sebastian Payne, we focused on the media. In addition to tackling the key differences between British and American attitudes towards journalism, Payne offered his insights on the road ahead for the struggling industry, highlighting various successes and failures in media innovation and entrepreneurship.

Solender: Has Brexit changed the way you view the rules of covering politics, and if so, how?

Payne: When you’ve got very divisive issues and rival camps on both sides, it forces you to think about how you’re reporting and analyzing stuff. What I do is either analysis or comment writing, so I’m not being one hundred percent objective in the same way as a wire reporter or a straight political reporter.

But you do want to be fair to both sides and you want to give both sides a fair hearing, and in the era where you’ve got MP’s referring to mainstream outlets like the FT as ‘fake news,’ you do have to be careful not to over-egg stories and over-egg facts.

Something I think is quite key is who you choose to quote. Take the Conservative Party, for example. There’s a whole range of opinions from hardline remainers to hardline brexiters, with a kind of bell-curve in the middle, and a lot of people who get the most quotes and the most airtime are the people on either end of that. Not the people in the middle who represent mainstream center-right opinion.

The reason for that is that they give good quotes–they’re colorful, they’re spikey. But the question is: is that best practice? Are we accurately representing what readers want? So when I’m looking for MPs to speak to, I try to make sure it’s a good cross-section and that I’m not representing a fringe opinion.

A lot of these quotes are anonymous or on background as “senior conservative” or “influential conservative,” so you have to make sure the person you’re quoting is representative. In many cases they aren’t. That can cause a problem.

That’s the main thing that has changed how I think about reporting. But it’s the same old rules as at  my last job at the Washington Post; trying to be fair, represent the situation, and try to inform readers. We’re very lucky at the FT that our readers have a good understanding of current affairs and world events and they want the detail. They want to get the nitty gritty.

Solender: Now, I know it’s different in America because media outlets [in Britain] wear their ideological affiliations on their sleeves, but do you think there’s some credence to the argument that being fair to both sides fundamentally avoids a certain amount of fact checking and lets politicians pass off what they feel to be true as the truth because we’re acting as stenographers?

Payne: This is obviously a big challenge. This has been characterized quite well as the difference between balance and the truth. During the referendum campaign in 2016, and during the 2016 Presidential election as well, a lot of TV outlets and publications tried to give balance to both sides of the argument while not necessary giving ‘the truth’ and ‘not the truth’.

One example of this came during the Leave campaign. They had a group called “Businesses for Britain,” and they managed to get a lot of small businesses who were in favor of Leave, but the weight of opinion [among businesses] was far more with remain.

So you had the CBI, Institute of Directors and thousands of businesses all wanting to remain, but the way it was represented was “here’s the remain business lobby, here’s the leave business lobby.”

I think a lot of viewers watching TV news, for example, didn’t see the difference. This was an actual strategy of the leave campaign. They were aware they had to dilute the business case because it had always been traditionally very pro-EU. So how to cope with that is a difficult question–there are a lot of conversations happening about that now.

With regard to the ideological viewpoint question, I sit on the FT’s editorial board and we have our principles. They are basically that we believe in free markets, free trade and liberal democracy. Those are the three underpinning principles that we’ve had since we started in 1888 and they have adapted to the times as you would expect. But that’s a very separate thing from our news reporting.

I couldn’t tell you the political opinions of most of our reporters and if I were in a reporting role I’d keep my opinions to myself as well. There is a difference there, and I don’t think the fact that the FT’s editorials are skeptical of Brexit influences our reporting. We’ve run op-eds by Jacob Rees Mogg. We’ve run lectures by pro-Leave figures. They’ve been featured in our news reporting. We’ve done interviews with them.

So the fact that the newspaper has a line that it injects into its editorial columns doesn’t have much impact at all on its reporting, and if it did I think it would be a bad publication and I think the publications that do that are lesser because of it.

Solomons: I think Andrew and American journalists have this noble view of journalism that British journalists don’t ascribe to. But the FT is on the serious side of things. Have you ever felt a need to be more fun or accessible?

Payne: If you look at America’s print press, it’s got three amazing, world-renowned publications in the Washington Post, the Wall Street Journal and the New York Times, which are the best in the world. But the pugnacious British press is one of the best things about this country.

We still have a lot of newspapers. We still have a big newspaper readership. Take the Sun for example. That’s a brilliant product! It speaks to millions of people every day and covers politics in a digestible fun sense, but I don’t think it’s any less serious than the FT is.

Yes, it might not have long think pieces on Brexit, but it still takes its views on Brexit very seriously and reports it very firmly as well–one of the best political reporters in this country worked for the Sun, for example.

That’s why some people criticize the Guardian for taking itself too seriously, and people who work for more popular publications like the Sun say their popularity comes from not taking themselves too seriously and trying to perform some quasi-official role, but instead appealing to their readers.

But I think there’s some room for both: the Guardian does have a lot of readers, particularly online these days, and the Sun has a lot of readers, and you’ve had some brilliant investigative journalism from across the whole spectrum.

So I think Fleet Street as a culture or an attitude is still there. It’s a healthy thing for British democracy. If we didn’t have that pugnacious press, I think we’d be a worse off country for it.

Solomons: So, do you know what Tortoise is?

Payne: I think Tortoise has got some incredibly talented journalists. Chris Cook, who used to work at Newsnight and the FT, he’s one of the smartest writers around and really gets policy.

But the challenge for these sites is, well, Tortoise has a premium business model like the FT does and maybe there is a route through that if you’ve got people who are willing to pay for really smart views. And there could be a model there. But you’ve got to have a sustainable model that will get loyalty from people.

When I worked at the Spectator, our challenge was that we were a weekly publication that was trying to remain relevant daily. So we had Coffee House, our political blog, which we used to update half a dozen times a day with new content, podcasts, videos, all that kind of stuff. The idea was to get it into your rhythm when you come to the Spectator.

I think that is the challenge for the slow news concept. If you’re engaged in current affairs and want to be stimulated with good writing by the Spectator, you’re probably going to be subscribed to the Telegraph or the Times as well. And if you’re going to read the New Statesman you’ll probably read The Guardian or something like that.

So the challenge for sites like Tortoise is how do you convince people to subscribe to it when it’s not your primary news source? Tortoise does have some interesting ideas about how to do that. And good luck to them, I think anyone doing quality journalism deserves as much help as they can get.

But as we’ve seen from Drugstore Culture, which was a site set up by Matthew D’Ancona, the The Guardian columnist, as a cultural site, that seems to have fallen apart within six months due to a dispute over the business model for it.

So there is clearly a business model that has emerged for a couple of very big, high-end publications like the FT, like the New York Times, like the Times of London. But that’s only a few publications.

Solender: Speaking of media startups, are you familiar with Axios?

Payne: I love Axios. I read Axios every day. Mike Allen’s email, I read that every afternoon.

Solender: Do you think there’s a way for new pioneering styles of journalism being championed at Axios–or Vox, with their explanatory journalism–to coexist with the legacy media outlets. Or will those new outlets start to overtake the dinosaurs in market share?

Payne: Well we’ve actually seen something of a consolidation in new digital media. As you’ve seen, BuzzFeed’s had its bumps in the road recently, as has VICE; it’s had several efforts to break into this country and has really not had a lot of progress.

But it’s different in different parts of the world. It’s different here because we still have, as I said earlier, a very pugnacious press.

Most of it has adapted quite well to digital arena. The Daily Mail is huge online, the Daily Express is massive online, the Telegraph has its freemium model, the Times has its subscription model. All the grand old names of fleet street are still relevant in the digital arena.

So there’s less of an obvious market there. It’s different in the US and has always had less of a national media and is more fragmented. Also, it’s just a bigger market as well.

PrevPrevious‘Too West Wing for The Thick of It’: Why Young American activism keeps failing in Britain
NextTrump, and the Aftermath: A Divided AmericaNext
On Key