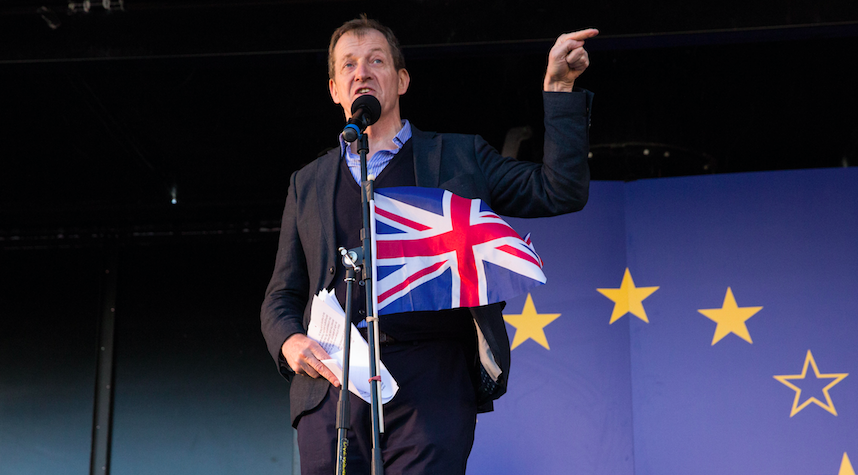 Solender: What is the current strategy being pursued to bring about a second referendum?

Campbell: One of the most important parts of it has been the Labour position because of the numbers in Parliament. The other part of the strategy is the public. One thing we’re focusing on is the Put it To The People march on March 23. I think the marches and the big protests we’ve organized in the past have had a very significant impact on the broader political debate.

When the People’s vote campaign started, there was very little belief that it had any chance whatsoever. I remember doing lots of interviews and people saying “you’re just like one of those Japanese soldiers in World War II who’s hiding in the jungle and still thinks the war is going on.” But since the first march, which was about 100,000 people in London, the media has started to take it seriously.

Then there were marches at all of the party conferences. I think that had a big impact on the debate, especially in Labour. It was a big big event and that made a lot of the MPs realize they’d been looking at this through the prism of “will of the people” without considering what happens if the will of the people changes?

So I really do hope the one on March 23, even though it’s perfectly obvious that Theresa May is adamantly opposed to the idea of this going back to the people and even though Jeremy Corbyn is pretty reluctant about it, [shows MPs] it may be the only way out.

And I think it’s important to get involvement from the student population. I do a monthly interview for GQ, and just after Brexit happened I interviewed Miriam Gonzalez Durantes, Nick Clegg’s wife, and she said something that stuck with me a lot: “Name me a country at any time in history, democracy or dictatorship, that has built a success by governing against the interests of the younger generation.” That’s what we’re doing. So I really do hope that students come out in force.

Solender: Probably the biggest question around a People’s vote is what it would look like. So I want to pose that to you: what would be the questions on a second referendum?

Campbell: Ultimately, that’s an issue that has to be decided by Parliament, but I think it has to be, essentially, Brexit against the status quo. And the only Brexit that is available on offer is Theresa May’s Brexit.

To make a case that for the Rees-Mogg-Farage-Johnson view to be included, they’d have to come up with a credible form of Brexit that was deliverable. Because the whole problem with the referendum itself: they promised something that was completely undeliverable. So it would have to be a credible form of leave against remaining in the European Union.

Solender: Strategically speaking, though, wouldn’t it be more beneficial to Remainers to have a three-option vote where you have hard-Brexit, May’s plan and then the status quo?

Campbell: Well I’m giving you what I would prefer, but there are people with whom I work on a daily basis who are in the position you’re in and think that would be a fairer and better way to do it. But as I say, that is one of the big questions we’re going to have to resolve but it’ll have to be resolved by the MPs.

Solender: So is your position that you don’t think the country should be put in the position to risk a Brexit that doesn’t have a clear plan like, as you say, a no deal Brexit?

Campbell: In an ideal world, I’d have liked more of our MPs, like Ken Clarke, to say “I don’t believe in referendums, I never have done. We should just revoke this whole damn thing and not do it.” Now I think that’s politically impossible and unsustainable because, a referendum having delivered this decision, you have to have a referendum to signal a change of direction. I also don’t think you can have a rerun of the same question. You have to have something concrete.

Solender: Who would you like to see leading the Labour party after Corbyn?

Campbell: I will say that when the Labour party has done well, it’s been when it has been able to reach out from its traditional base. One of the reasons why Labour is not doing remotely as well in the opinion polls as it should be is because of the loss of support among people who want leadership and want the truth about what Brexit is doing to this country.

Labour leadership has made this shift on Brexit–backing a People’s vote–because people like John McDonnell, who’s obviously close to Corbyn, and Emily Thornberry and Kier Starmer, who are really desperate to get a Labour government and be part of that Labour government, have reached the conclusion that Labour’s Brexit position has not been helping in that regard.

One of the things that has been depressing was, when Chuka Umunna and Luciana Berger left, the number of Labour voices out there on social media who said “good riddance” and “red tories”. Well that’s fine as a sort of piece of knee jerk abuse, but you can be absolutely guaranteed that other people who are not MPs have already made that decision.

You do not win by losing support. You have to hold on to the support you’ve got and build new support. I saw an interview that Angela Rayner did on the TV around the time of the setting up of this new group and she said basically ‘in the last election the country united behind our manifesto,’ I thought ‘hold on a minute, Labour lost!’

Solender: Do you think Jeremy Corbyn is capable of winning a general election?

I remember, when I was working for Tony Blair, we used to have these meetings every week where we used to analyze the opposition and what they would do to us if they knew everything about us that we knew. And I remember Tony at one point said “you know, this is all just a bit of a waste of time. The country is never ever going to elect [Duncan Smith].” And sometimes that happens.

Now, what happened in the last election–Theresa May’s botched election with all that “strong and stable, strong and stable,” talk–is Labour did a lot better than people expected but it was based against an expectation that the Tories were going to get a landslide and they didn’t even get a majority. He campaigned a lot better than people thought he would. There were parts of that campaign that really struck a chord with lots of different people that maybe wouldn’t normally have voted Labour. Fine. But we lost. We didn’t win against the worst campaign ever.

I’ve been in the Labour party all of my adult life and my partner Fiona has been in the Labour party even longer. She’s resigned! She’s quit! I can’t bring myself to, but she and I pretty much don’t disagree about anything. I know lots of people like that. The reason she gave is “I can’t imagine putting across a ballot paper that means Jeremy Corbyn might be Prime Minister.” Partly because of Brexit, partly because of anti-Semitism and partly a general judgment. And that’s someone who has been lifelong Labour. There will be others. A lot.

Solender: The Independent Group has sort of created a palatable alternative for the Blair coalition New Labour people and people looking for a more overtly pro-EU option. What would it take for the Labour party to lose your vote in favor of the Independent Group or the Liberal Democrats?

Campbell: That’s a very good question. I have to tell you, Fiona asks me every day. She did a tweet this morning where she said she’s not regretted leaving a single day, which I’m amazed by. I don’t know, is the answer.

Let’s say Brexit happens and the Labour stance is “well we tried our best,” but I reached the conclusion that those like Keir Starmer, who have been trying to get to a more sensible position through, were kind of outmaneuvered by the politics of those who just wanted to facilitate Brexit. I think if I really felt that, I’d find it quite difficult to vote for Labour.

Solender: Do you think that more Labour MPs, or Tory MPs for that matter, will defect to the Independent Group?

Campbell: It’s certainly possible. There’s no doubt that there’s a lot of disaffection in both the Parliamentary parties. You talk to anybody in the cabinet and some of them are at a loss with what to do with the way Theresa May conducts business.

Likewise on the Labour side, you just have to go back to some of the things they’ve said publicly. But as you’ve seen with the ones who have left, it’s a very very big thing to do. And I’m not an MP but even I find it difficult. I’m amazed that Fiona has found it so liberating to have done what she’s done. I can’t bring myself. So I don’t know, but I think a lot of them are wrestling with it.

Solender: Final question. I want you to play devil’s advocate. If you’re forced to advise Theresa May, what would you tell her to do from a self-preservationist standpoint? How does she satisfy her party, her constitutional duty and the British public?

Campbell: I think she should basically stand up and say “I have tried every which way to do this. I have tried to do this in a way that holds my country together, that holds my party together, and I’ve tried not to damage Britain’s future and our general and economic standing in the world. And reluctantly I’ve come to the conclusion that it cannot be done. Therefore, I want to go back to the country and ask them for their permission to revoke.”

And do you know what, I think she’d have an absolute meltdown in the Tory party–they might get rid of her, they might not–and what’s more I think for the vast bulk of people there’d be a massive sigh of relief. But she’s not going to do it.

And that’s about the economy, the consequences of the 2008 crash, the elites. And you can do all that stuff as a left-of-center progressive leader. But when they say “we can do Brexit better than the Tories,” I think the public just doesn’t buy it.

PrevPreviousLSE’s top donor was also a prominent backer of Vote Leave. Does it matter?
NextCircuit VS the rest: The silent struggle over university laundry roomsNext
On Key