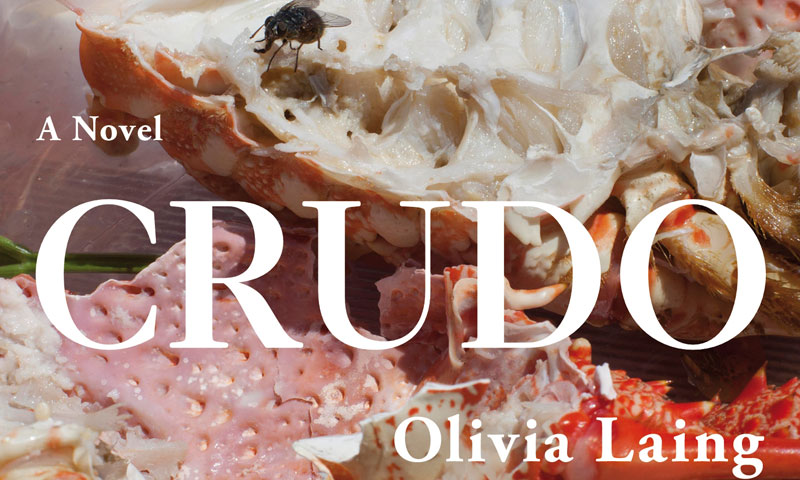 Kathy is getting married in the summer of 2017, right in the midst of the Trump presidency, Brexit, and fascist uprisings.

On holiday with her husband-to-be in Tuscany, she discovers that ‘the Internet was excited because the president had just sacked someone’, and during her wedding, a guest announces that Steve Bannon had resigned – “They all checked their phones.” Olivia Laing, explores the intersection of the personal with the political by juxtaposing the bleak global politics of 2017 with what should be the happiest time in her protagonist’s life.

But it is not the happiest time. Kathy is a self-described commitment-phobe, having lived all her life shuffling between people and places, and at the age of forty she is going to marry a man twenty nine years her senior. She is terrified of intimacy, she views love “as invasion, as the prelude to loss and pain”.

At one hundred and thirty-three pages, Crudo is the kind of novel you read in one sitting. The length leaves the plot underdeveloped, but the lack of focused narrative is what gives Crudo its immediacy, a sense of everything happening at once.

Laing’s work has always examined the lives of others in the context of her own. In her last book, The Lonely City, she studies the loneliness of four New York artists while she narrates being abandoned by her lover in the city. Crudo’s Kathy is none other than American experimental novelist Kathy Acker, who died of breast cancer in 1997, and on whom Laing transposes her own marriage to Ian Patterson. The biographical patchwork may seem strange, even wrong, but as Laing points out, Acker herself was no different, “a grave robber, a bandit, happy to snatch what she needed, but also morally invested in the cause”.

The word ‘crudo’ means raw (in Italian), which is exactly how Laing serves her story; an unfiltered account of the inner life of her protagonist. It is a study of contemporary life, of the powerlessness we feel in our interaction with the news and the apathy it generates.

“Ten years ago, maybe even five, it was possible to ignore atrocities, to believe that these things happened somewhere else, in a different order of reality from your own. Now, perhaps because of the Internet, it was like the blind spot had got very small, and motional like a marble. You couldn’t rely on it. You could go on holiday but you knew corpses washed up there, if not now then then, or later.”

But not all is lost. In spite of its pre-apocalyptic tone, the novel is hopeful, even affectionate on occasion.

“She was experiencing one of those occasional upswells of love, when she suddenly felt satiated on a neurological and also soulful level, enough and not too much pleasant information saturating the synapses in her brain.”

PrevPrevious“Been So Long” Since I Reviewed A Bad Film
Next“Halloween”: Who Hunts Whom?Next
On Key