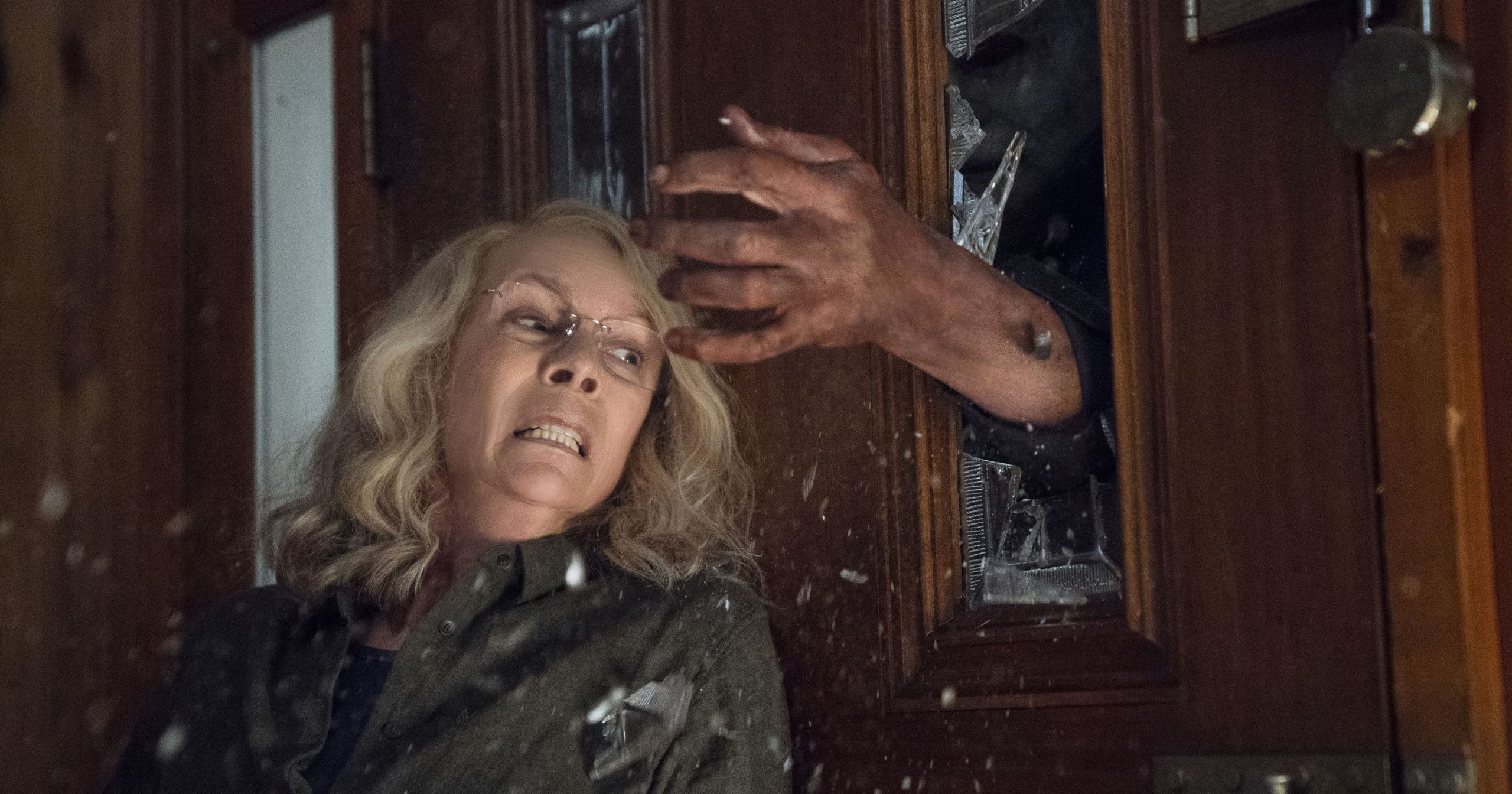 “Halloween”: Who Hunts Whom?

Forty years have passed since masked murderer Michael Myers first wreaked havoc on the town of Haddonfield. The Halloween franchise, kicked off in grand fashion by John Carpenter in 1978, has produced nine offspring, all disavowed by critics and Carpenter himself. With his sequel, David Gordon Green tried to bring the franchise full circle. Yet, the end result is far from flawless. While trying to revive Carpenter’s formula – and adding a few interesting twists of his own – Green seems to misunderstand what made the original so terrifyingly good in the first place.

It’s that time of the year again, and while New Jersey teenagers stock up on booze, Michael is lurking behind the walls of his psychiatric ward. When two overzealous podcasters pay him a visit and wave around his old mask, we know it won’t be long before he is unleashed again.

Meanwhile, Laurie Strode (Jamie Lee Curtis), the only person to ever survive Michael’s attacks, has grown into a sheltered, misanthropic cat lady. In lieu of cats, she has surrounded herself with weapons, preparing for the final showdown she knows is coming. Laurie has alienated her daughter (Judy Greer) in the process, and the only one who seems to give credence to what she says is her teenage granddaughter (Andi Matichak). Focusing on three generations of Strode women is an interesting idea, which the movie doesn’t explore with nearly as much depth as it should.

After Michael inevitably escapes and picks up his murder spree, the film goes downhill. What made Carpenter’s classic so compelling was its slow-burn brand of horror, which valued atmosphere over gore. Green’s film is awkwardly paced, switching from ghoulish murders to college humor with little tonal coherence. While Carpenter knew exactly when to use his antagonist and when to relegate him to the shadows, this film’s Michael, though considerably older, is less a shadowy Shape than a full-on action-man, the Terminator in a mask.

Halloween’s best notion is its attempt at franchising the Strode family women. Laurie’s daughter Karen and granddaughter Allyson are brought in as worthy heiresses to their badass predecessor. Although Green’s exploration of family trauma is only surface level, there is a handful of good scenes featuring this trio of no-nonsense women. Unfortunately, the focus on the Strodes leaves the rest of the cast unaccounted for. Halloween has more characters than it knows what to do with. It has a problematic lack of interest in its supporting cast, most of whom are portrayed as little more than juicy pumpkins for Michael to carve up. The death scenes are more numerous than imaginative, making the film’s midsection an exercise in repetition.

In the end, this is very much Laurie’s movie. Curtis is believable as a shell-shocked yet determined version of her 1978 self, the girl who has been crying wolf for forty years and accepted social stigma because she knows she’s right. Halloween’s complex brand of feminism always stemmed from the way it portrayed Laurie. While the other girls in Carpenter’s film were sexualized and killed in fetishistic rituals, Carpenter refused to objectify Laurie, which became synonymous with her ability to avoid becoming Michael’s victim. Green takes this idea further, toying with the concept that Laurie is as much a predator for Michael as he is for her. Fans will enjoy spotting the many nods to the original movie involving role reversal: Laurie taking Michael’s place as the hunter.

Still, Halloween left me more than a little dissatisfied. Let’s hope its upcoming sequel takes a leaf out of Carpenter’s book by focusing on its characters and putting Michael back where he is most effective: in the shadows.

PrevPreviousCrudo: Weddings, Wars, and the World’s End
Next“Widows”: A Blockbuster Worthy Of Your MoneyNext
On Key