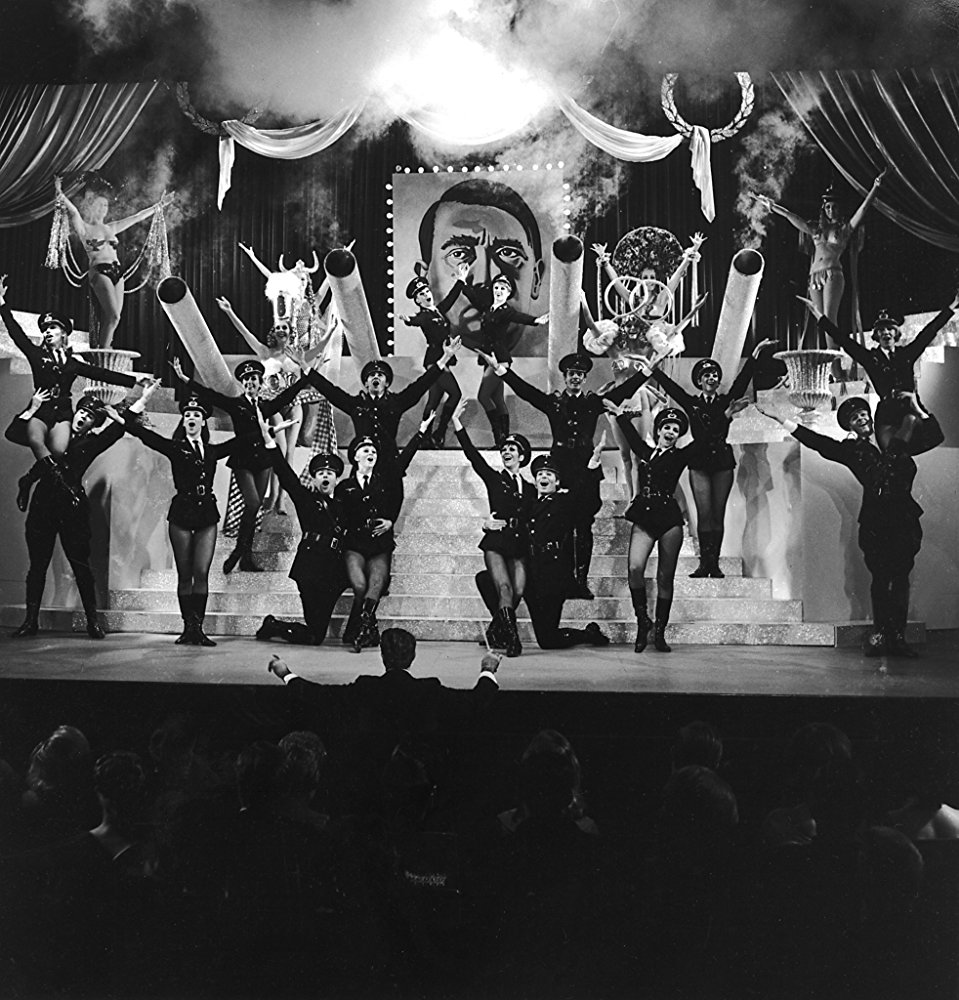 Darkest Hour was the second Nazi-centred film of the week. I watched Mel Brooks’ classic The Producers (1967) for what must be the twentieth time. The story is simple, but in its absurd and brilliant way, comically groundbreaking: a struggling Broadway producer and his meek accountant, upon realising more cash can be raised with a flop than a hit, do exactly that. After hours spent searching for the worst play imaginable they settle on the lone work of Franz Liebkind, a retired, shell-shocked Nazi– a camp musical with a memorable name, “Springtime for Hitler”. Bialystok pleads with Liebkind for the rights: “We want to show the world the true Hitler, the Hitler you knew, the Hitler you loved. The Hitler with a song in his heart!”

Not many comedies remain hysterical fifty-one years after release. Recently Larry David, creator of Seinfeld and Curb Your Enthusiasm, described Brooks in The Producers as having constructed “the greatest comedic premise of all time.” He’s probably right.

The reason I mention this is because Britain in May 1940, the subject of Darkest Hour, might represent drama’s greatest premise. Nazi Germany marching forward. France on the brink of collapse. Britain facing invasion, alone, for now.

Winston Churchill has been portrayed 30 times in movies and by 22 actors on TV, and when you understand the scale of his task you can see why. Darkest Hour spends little time, and probably too long still, outlining just how fucked Britain was (for want of a better phrase), and by extension Europe’s Untermensch masses.

Much of the film is as might be expected, an occasionally gripping but generally conventional portrayal of the Conservative Party’s internal opposition to the reckless Churchill. It’s British period drama in all the usual ways: Old Boys’ backroom scheming, casual sexism, and a vastly overstated role for the monarch, King George VI, which we’ve come to expect since The King’s Speech stole Best Picture from The Social Network all those years ago. At times it feels like a weak episode of The Crown, though that says more about the quality of Peter Morgan’s series than of Joe Wright’s film.

That being said, such a reading of Darkest Hour does a slight disservice to a searing performance from Gary Oldman, who stands out amid middling competition as the best Churchill for some time. He brings humour and emotional grounding to a film which too often veers away from personality, viewing events cosily from above – sometimes literally. If Darkest Hour is just a fine retelling of that strikingly eventful week at the end of May 1940, Oldman makes it a good one.

The Post, on the other hand, is based today. Or close enough. During the trickling of information about just how fucked decades-long US intervention in Vietnam has proved (for want of a better phrase), newspapers like The New York Times and the small-time player The Washington Post are essential in disclosing key public-interest secrets, despite intense White House opposition. The Times is the most powerful paper in America, but the Post has the added advantage of being owned by Katharine Graham (Meryl Streep) and edited by Ben Bradlee (Tom Hanks), with the assistance of a pack of bold newspapermen and women willing to fight to save a democracy teetering toward the shadows.

If that wasn’t enough to set up a political action-adventure movie in the mould of Indiana Jones, The Post benefits from having its director. Steven Spielberg takes Liz Hannah and Josh Singer’s snappy, transporting script, truer to history than you might expect and with all the right payoffs, aiming the camera with the unique tension we’ve come to expect. When Arthur (Bradley Whitford), a typically sleazy board member, pleads with Graham not to take on the Nixon administration Spielberg seems to dance round the terrace with his characters; when Graham arrives at a sleazy board meeting on Wall Street we pan from the monochrome boulevard to the reds and yellows and greens of the sidewalk. It’s the sort of shot every director dreams of being able to put together. And if we weren’t so accustomed to exceptional work by Spielberg, Streep and Hanks, they’d be getting more recognition, too.

Ultimately The Post utilises a pivotal era to speak, with eloquence and intent, to ours. Film fans and politics nerds alike should be in awe that it does it so damn well.

PrevPreviousSecrets of Netflix – Creep 2 (2017)
NextThe Beautiful Humanity of Ambience: Why Stars of the Lid Are My Favourite BandNext
On Key