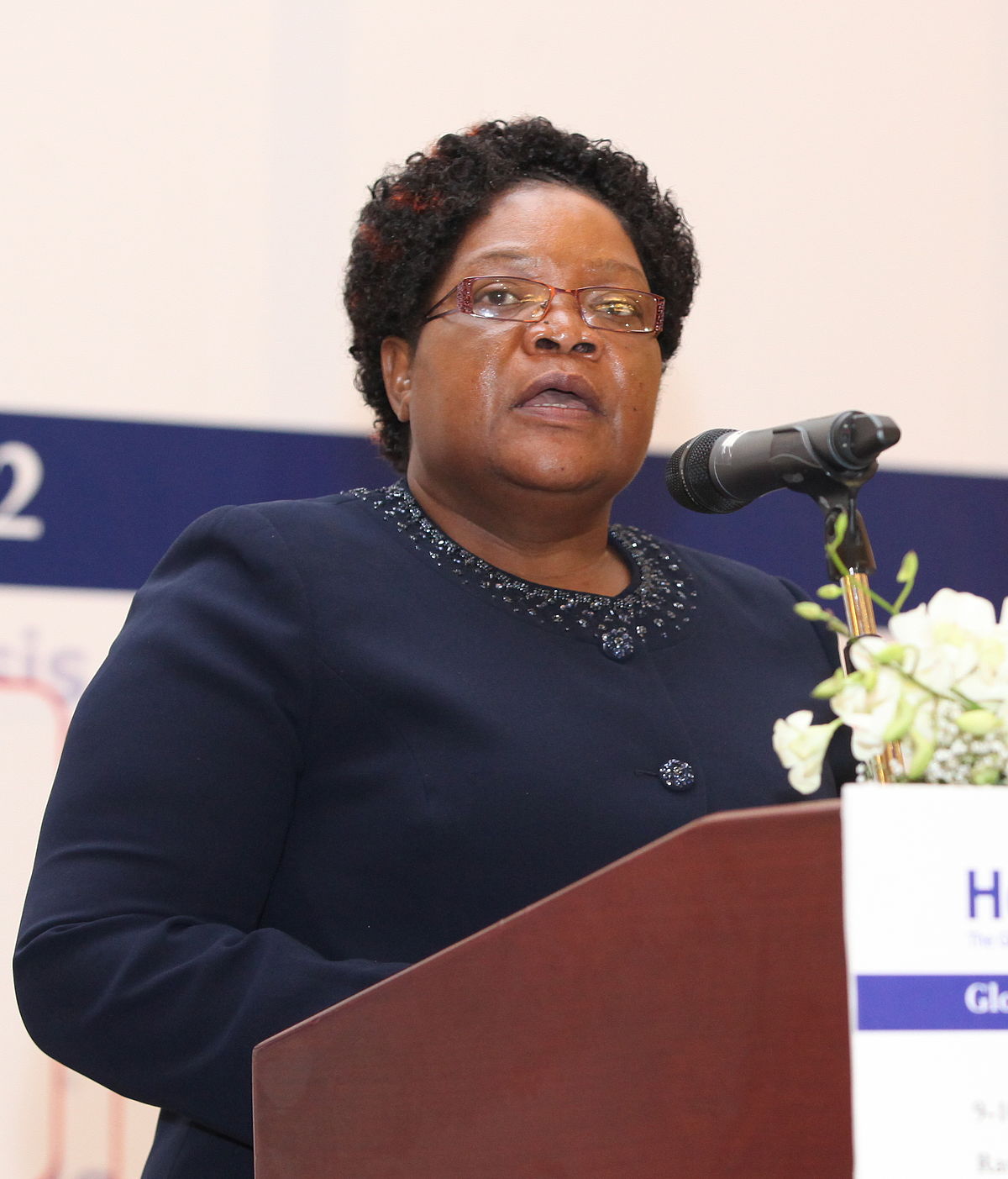 Joice Mujuru was the first Vice President of Zimbabwe, serving from 2004 – 2014, and is a Presidential candidate for the 2018 elections. She was a panellist for the ‘Women Leaders on the Global Stage: lessons for Africa’ public lecture hosted by LSE’s Firoz Lalji Centre for Africa and Africa Talks, held on Tuesday 7th March ahead of International Women’s Day.

At the age of 17, Mujuru joined Zimbabwe’s (then known as Rhodesia) War of Liberation as a freedom fighter under the nom de guerre ‘Teurai Ropa’ (spill blood), and became one of the first women commanders in Mugabe’s Zimbabwe African National Liberation Army (ZANLA). Since the country’s Independence in 1980, she went on to become the country’s youngest cabinet minister, holding posts in every post-independence government until she was eventually sworn in as Vice President in 2004.

She served as Vice President in the Mugabe administration for a decade and was long considered to be the successor to 93-year old President Mugabe, before being sacked on the grounds of “plotting to unconstitutionally remove President Robert Mugabe from office”, according to a statement from the Zimbabwe African National Union-Patriotic Front (ZANU-PF).

She formed her own opposition party in 2015, the Zimbabwe People First party, now rebranded as the National People’s Party. She is also the widow of the first black Chief of the country’s national army, General Solomon Mujuru, who died under suspicious circumstances in a house fire in 2011.

(Q) You recently rebranded your opposition party from the Zimbabwe People First party to the National People’s Party after getting into a legal dispute over the original party name. However, you are now facing another legal dispute over the new name, National People’s Party, as Amos Chiseri has claimed that he founded a party by the same name in 1994. And he’s given you 14 days to find a new name or else face a lawsuit. Are you going to change the party name yet again?

There is nothing that he is going to do because in Zimbabwe there is no law that governs the creation of a party or the registration of a party. But when we decided that we wanted to rebrand, we then approached the ZEC (Zimbabwe Electoral Commission), which is the organisation that supervises elections in our country. And we just lodged our papers with the ZEC so that they know we are a newly rebranded party.

(Q) You’ve been in government since the 1980s, and were President Mugabe’s Vice President for a decade. Apart from forming and now rebranding your opposition party, what else have you done to convince Zimbabweans that your administration will be different to President Mugabe’s?

And what we are also trying to do is to try and visit areas where they have a lot of issues with government. The government will not be in a position to go there and approach it the way we’re doing. And this has has given a lot of confidence to our party because these are people who live in very backward areas and where genocide caused by the government has happened. So I’ve gone to talk to the local leadership – the chiefs and their people – and this has given a lot of confidence to our people.

(Q) What would you say to those who argue that you had 30 years in government, but never once challenged the atrocities committed under the Mugabe administration, including the genocide?

Yes, I’ve been in government for 10 years (as Vice President), yes these things have happened while I was in government. But you know what, we have ascribed to the secrecy act, and with that you cannot go against the issues that the government has been doing.

But what I can also tell you, is that I have tried to tell the people that its not all the things that happens in government that each and every Minister knows about and is a part of, but becomes a part of because of association. But some of those things, you cannot confront them just like that, but try by all means to use your own diplomatic ways of how you think differently from the majority of people.

And with that I can tell you that I have programs that intended to benefit the common, general person in the country. And yes, on occasion I have addressed rallies or meetings where I have been asking questions – why certain things have been done the way they have. So that’s all I could do in that moment being a junior Minister.

(Q) As Vice President, were there times where you wanted to challenge or did challenge President Mugabe on some of his actions?

I am vowed to the secrecy act and don’t want to go against that.

(Q) But have you challenged him internally?

(Q) Archbishop Desmond Tutu famously stated that President Mugabe has turned the country from a bread basket to a basket case. What do you make of that statement? Do you agree with it?

Its true to the word, because its not anything that anyone can hide. We are now a different country. We used to be the pride of Africa but right now I think we’ve caused a lot of misery. Because they (the government) know what we’re good at and they know how much we are worth as a country. They know how hard working an ordinary Zimbabwean is, because they are witnessing all that from the people living in the country. Even the government of South Africa today, I can tell you, more than half of its executives are Zimbabweans.

The eradication of corruption. Making the economy of Zimbabwe tick again. Making sure that every Zimbabwean who is abroad can come home and participate in the rebuilding of the country.

Right now, we are no longer a respected or given our rightful position world over. Our foreign policy has to be friendly globally. And we want every investor to find it easy to come and do business with Zimbabweans.

(Q) In terms of foreign policy, what would you do differently to what is being done now?

For instance, we have our policies that are not conducive and we have to either revise them or completely do away with them. I will also make sure that for everyone who wants to come and invest his dollar, he must be rewarded for it as much as it would be affording Zimbabweans some benefit. Everybody should feel free to come and do business with Zimbabwe, and also feel comfortable to be in Zimbabwe. Because as I tell you today, no matter what levels we are living in, we are a better country than those that are receiving a lot of investors, because we are a free country. Crime in Zimbabwe is very low if not considered anything at all.

(Q) You mentioned that you want to make Zimbabwe comfortable for investment and that you want to make it safe. But you’ve stated before that the Mugabe administration might have been behind the death of your late husband, Commander Solomon Mujuru. So do you yourself feel safe in Zimbabwe in the run up to this presidential election?

Zimbabwe is home, and home is best. And I feel safe because I am among my own people.

(Q) So you don’t ever worry about something happening to you?

Even when I’m seated here I’m worried! That is something that you cannot get away with. Trying to think of staying elsewhere would not make me feel comfortable, but when I am at home and have the security of my own people, that is the safest approach.

(Q) Have there been times where you’ve felt that your safety was most at risk? What about when you stated that President Mugabe was behind the death of your husband?

When something terrible happens to you, obviously you are bound to think of many things. But that does not mean you can actually abandon your own home. But talking about it would make the world know and it would also make him (Mugabe) understand the way how we would be feeling. So it was good for me that I mentioned that, because on many occasions he was talking as though it was a simple, straightforward death.

(Q) If elected President, would you charge President Mugabe for the death of your husband or perhaps open up an investigation into it?

No, we’ll see when the time comes.

(Q) Opposition leader Tsvangirai is expected to announce his preferred political partners in the cross-party opposition coalition that is being formed ahead of next year’s elections. How much influence do you think you will have in that coalition and do you know what your portfolio might be?

We haven’t discussed portfolios and haven’t gone into detail about how it will be formed, so when the time comes I think the world will be made to understand.

(Q) What are you expecting to happen?

Of course we have a coalition, because we know that is the best route to take considering what has happened and what might be planned by ZANU-PF government. So if we were to form a coalition it would give people more confidence in us – they would feel more secure. The other thing is that a coalition brings about numbers.

(Q) Realistically, how good do you think the coalition’s chances are of usurping President Mugabe at next year’s elections?

There are certain things you can’t be sure of, but once you try to prepare for those big things, then one becomes more confident in getting better chances of beating the opponent. Once we are united, there are several things that are positive. From our side, it is National People’s Party first. We have a lot of freedom fighters who have been the strongest appealer and these are some of the people who have joined my party.

(Q) Would you challenge Tsvangirai for the leadership of the opposition coalition?

We haven’t discussed it. We’ll see when it comes.

(Q) Do you think he would be a good opposition leader or do you have your reservations?

(Q) Before we conclude – its been reported in the media that when you were 18, you shot down a helicopter with a machine gun during the War of Liberation. How much of this story is true and how much has been exaggerated?