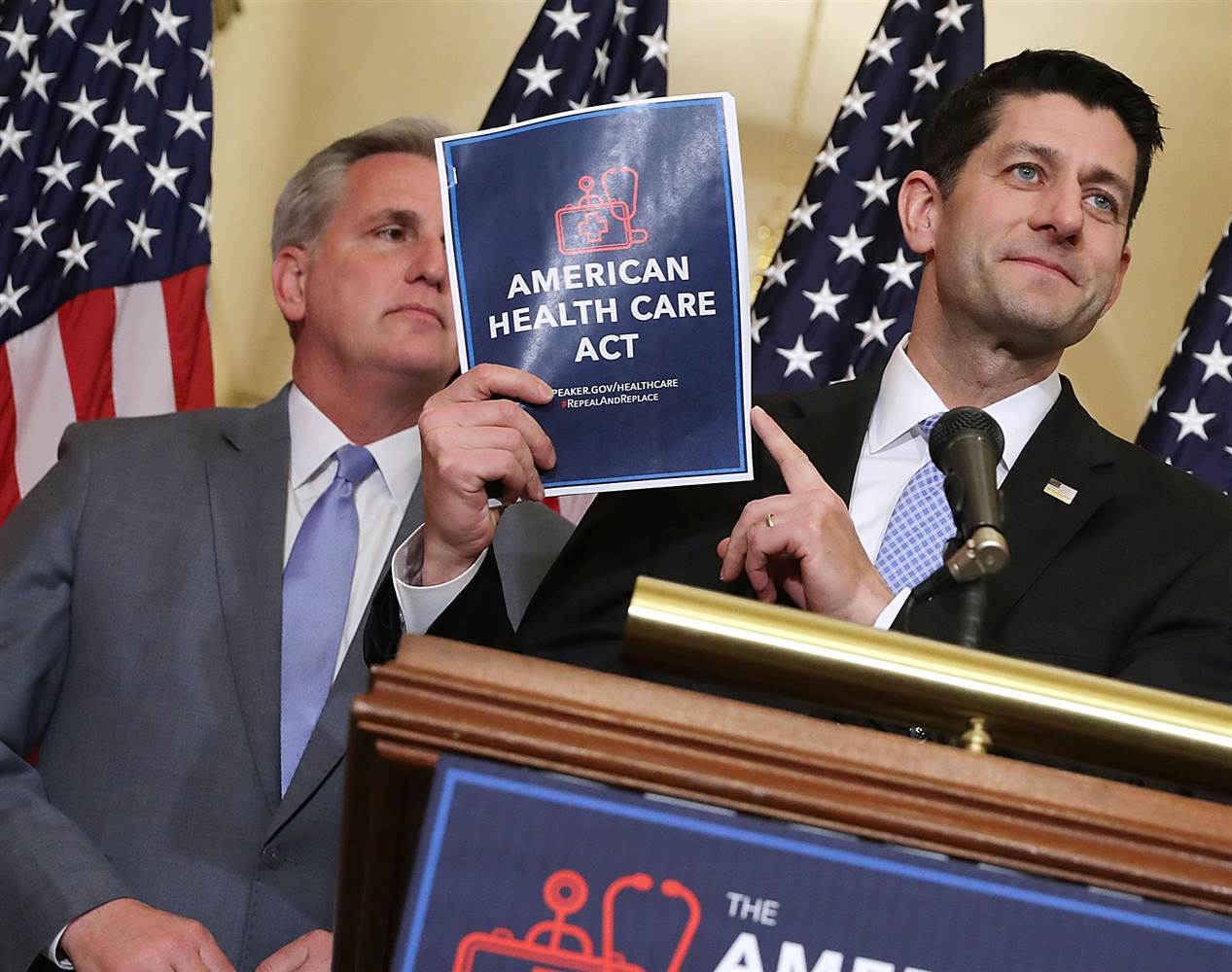 In the US, the debate around the Republican health care legislation reached a fever pitch last week as the Congressional Budget Office (CBO) released its analysis of the American Health Care Act (AHCA). The report’s release has sparked conversation within the GOP around possible amendments that would appease concerns and lend the bill enough support to pass along party lines.

Democrats are united in opposing the bill. More conservative GOP members complain that it does not go far enough to slash benefits and spending, while more moderate members are dissatisfied with its projected impact on the number of unemployed.

President Donald Trump, House Speaker Paul Ryan (R-WI) and other GOP leaders are working full-time to solidify support within their party. The House Republican appeal for support extends beyond the circles of the political elite. On their AHCA campaign website, readthebill.com, visitors are informed that “The American Health Care Act is a historic step towards making America great again.” As an American, they want you to know that you, too, can get involved to #passthebill.

You can start by testing your knowledge via the “Can you list Obamacare’s failure quiz”, featuring a rather somber looking image of President Obama. Next, read about how the AHCA will improve healthcare by “dismantling the Obamacare taxes that have hurt job creators”, “modernizing and strengthening Medicaid” and empowering “individuals and families to spend their healthcare dollars the way they want and need”. And those are just a few of the highlights.

Paul Ryan tweeted in response to the CBO that the report proved that the “American Health Care Act will lower premiums & improve access to quality, affordable care.” By “improve access” of course what he really means is that insurers will be able to slightly lower premiums once poor elderly people have been priced out of the market. Not to mention that the bill increases the amount insurers can charge in deductibles – out of pocket expenses for healthcare procedures. I’ll come on to this later.

Sarcasm aside, now is the time to think beyond the politics and ideological rhetoric that have surrounded the health care debate in the United States since the Affordable Care Act was signed into law in 2012. Given that the American Health Care Act narrowly passed in the House Budget Committee on March 16, 2017, it is clear that the US is on the verge of another monumental shift in its approach to health care.

What kind of shift might Americans have in front of them?

For starters, despite the hype, many of the regulations regarding the market for individual healthcare plans created under the Affordable Care Act would remain in place under the AHCA. As the CBO analysis states, plans would still be required to cover particular kinds of health care services and individuals could not be denied insurance due to a preexisting condition.

Supporters of the AHCA are keen to emphasize that, the CBO estimates that average health care premiums under the new legislation would be cheaper than under the Affordable Care Act. By 2026, they are projected to be 10% lower than they would be under the current law. However, this would be after an initial spike in premiums, between 15% and 20%, in 2018 and 2019.

How does the AHCA achieve such savings? Primarily by reducing federal spending on Medicaid, a program that provides health insurance for the poor. The cuts are estimated to result in $880 billion in savings between 2017-2026.

Medicaid is jointly funded by states and the federal government. Under the Affordable Care Act, states were given the option to expand the eligibility threshold to adults under 65 whose income was up to 138% of the Federal Poverty Line (FPL), which is up to $16,643 based on the 2017 Federal Poverty Level. They were also given a huge incentive; the federal government would pay 90% of the costs towards coverage for the newly eligible, rather than the 57% that it paid for the previously eligible.

31 states and the District of Columbia signed on.

Additionally, under current law, the federal government reimburses states for a fixed percentage of costs regardless of the amount. So, whether enrollment increases or health care costs per enrollee increase, they receive the same level of reimbursement.

Under the AHCA, the federal government would, starting in 2020, place a cap on the amount of reimbursement provided to states. Taken together, these two measures will make it much more expensive for states to maintain, let alone to expand, Medicaid enrollment levels.

The CBO estimates that by 2026 there will be 14 million fewer Medicaid enrollees. Among them are projected to be those who are currently eligible and those who would have received coverage as a result of further expansion under the Affordable Care Act.

Another significant source of savings under the AHCA would come from eliminating the Affordable Care Act’s health care subsidies to individuals. This is projected to cut $673 billion from the federal budget between 2017-2016. This would be partially offset by the $361 billion tax credit subsidy enacted by the new legislation.

The Affordable Care Act provides two types of subsidies: a refundable tax credits to cover a portion of an individual’s health care premium for those between 100% and 400% of the FPL, and “cost-sharing” subsidies to reduce out-of-pocket expenses (e.g. deductibles, co-pays) for households with incomes between 100% and 250% of the FPL. Through these subsidies, the Affordable Care Act insulates enrollees (i.e. those who have purchased insurance through the marketplace established by the legislation) from the effects of skyrocketing health care costs since they pay a percentage of costs based on their income and the federal government picks up the balance.

Under the Affordable Care Act, the size of the tax credit subsidy varies by the “benchmark” health care premium in an enrollee’s reference area. The size of the cost-sharing subsidy varies by income, geography and age. The amount of the tax credit subsidy introduced by the AHCA will vary by age – regardless of a person’s income (except for those who would be made ineligible; those with incomes above $75,000 for individuals or $150,000 for a two-person household) or cost of health care premiums in a person’s area. Enrollees, who would no longer be restricted to the marketplace, would have to pay more out of pocket – especially those living in high cost areas.

The impact of changes in the size of subsidies under the AHCA would vary by income. Many lower-income individuals would receive a smaller tax credit than under the Affordable Care Act, and have to pay more still because of the elimination of the cost-sharing subsidy. They will therefore have less incentive to purchase insurance. Conversely, those with comparatively high incomes, particularly those above 400% of the FPL would have more incentive to purchase insurance because of the reduction in out of pocket expenses to them.

Federal spending for health insurance subsidies to individuals are projected to decline “significantly” under the AHCA compared to under the Affordable Care Act. First, in response to removal of the individual mandate and the cost of out of pocket expenses, many people would choose not to purchase insurance. Second, the size of the subsidies would be approximately 60% lower than under the Affordable Care Act in 2020 and about 50% lower in 2026.

The budget savings that would be achieved under the AHCA by slashing Medicaid and subsidies to individuals would be partially offset by reductions in revenue over the 2017-2026 period. This includes $210 billion in mandated penalties to uninsured individuals and to employers of a certain size that did not offer health insurance to employees. Additionally, revenue would be reduced by an estimated $592 billion. According to the CBO report, this will primarily be a result of repealing Affordable Care Act’s revenue- related provisions the Hospital Insurance payroll tax rate for high-income taxpayers, a surtax on net investment income for high-income taxpayers and annual fees imposed on health insurers.

How would the changes in incentives described above for states, individuals, and others impact health insurance enrollment? Under the AHCA, would be 14 million fewer people enrolled in health insurance plans than under the Affordable Care Act in 2018. By 2026, this number is projected to rise to a difference of 24 million. A major source of the decline in coverage is projected to come from lower rates of Medicaid enrollment, as states seek to reduce costs after federal cuts kick in. The CBO analysis predicts that in 2026, “an estimated 52 million people would be uninsured, compared with 28 million who would lack insurance that year under current law.”

Overall, the population with individual health care plans is projected to be on average be younger people with higher incomes than under the Affordable Care Act. According to the CBO analysis, “although the agencies expect that the legislation would increase the number of uninsured broadly, the increase would be disproportionately larger among older people with lower income; in particular people between 50 and 64 years old with income of less than 200% of the FPL would make up a large share of the uninsured.”

The CBO analysis describes the substantial level of uncertainty surrounding its estimates, which are due to the uncertainty surrounding how various actors will respond to changing incentives caused by the American Health Care Act legislation. The report states that estimates are in “the middle of the distribution of potential outcomes”. Which means, things could turn out much better for the uninsured low-income and elderly individuals than the present estimates suggest- or much worse.

In any case, a review of the CBO’s analysis of the GOP health care legislation necessitates a reassessment of some of the slogans from the AHCA’s campaign website. “Dismantling the Obamacare taxes that have hurt job creators” might then be interpreted as “offset cutting taxes for high-income earners by cutting health benefits for poor people” while “Modernizing and strengthening Medicaid” might be reformulated as “largely defund Medicaid,” and “Empowers individuals and families to spend their healthcare dollars the way they want and need” could be “give Americans the freedom to pay more out of pocket for their own health care”. Millions of poor and elderly Americans soon to be priced out of health insurance are about to find out what “choice” and “access” really mean in the era of alternative facts.