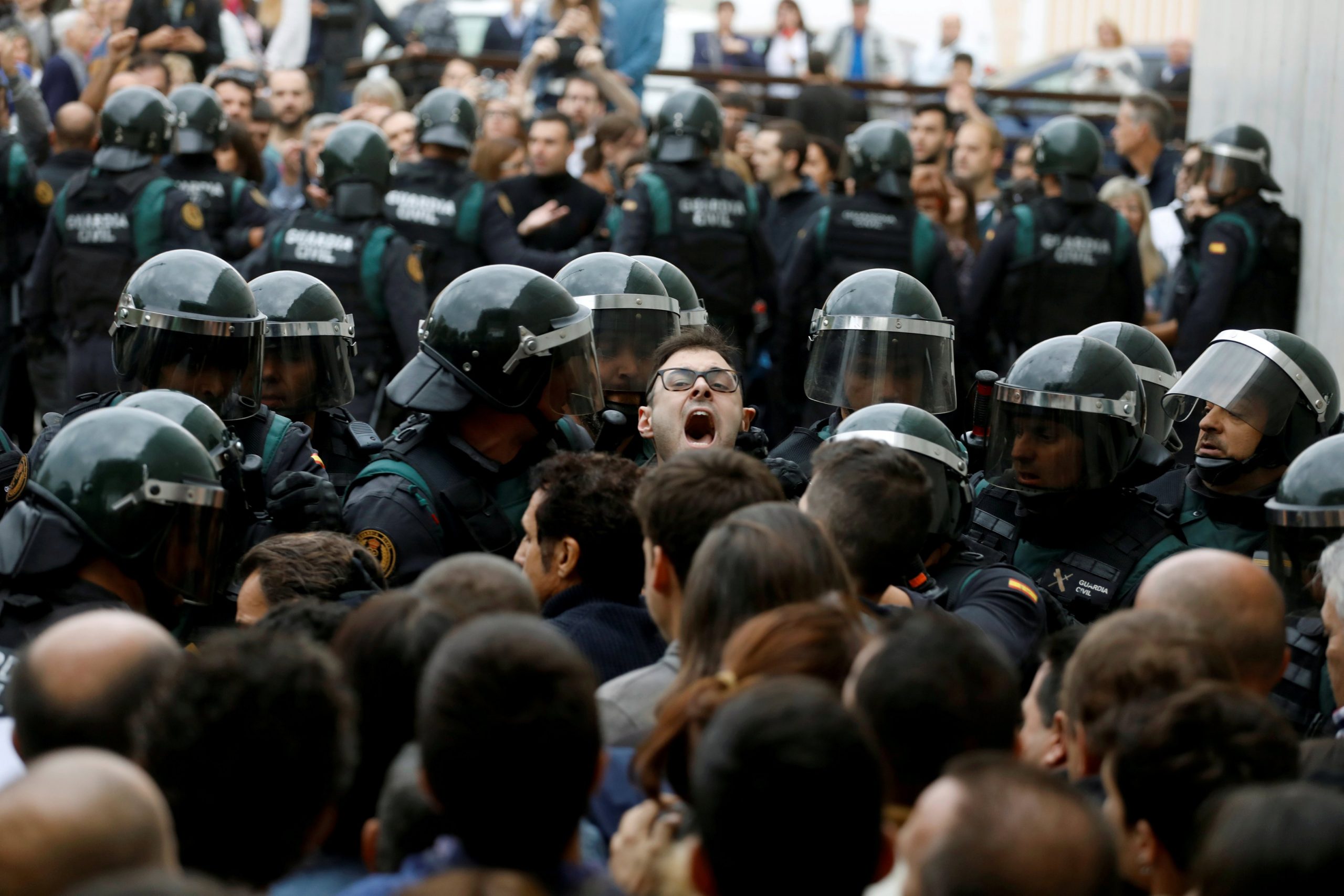 In Homage to Catalonia, George Orwell’s famous account of his experiences during the Spanish Civil War, Orwell wrote that “there are occasions when it pays better to fight and be beaten than not to fight at all”.

Today, those words feel quite chilling. According to the Catalan Department of Health, nearly eight hundred civilians (as of 8PM 01/10/2017) have been treated for injuries incurred from clashes on Sunday with the Spanish police and civil guard, deployed by the central government to close polling stations and prevent participation in a referendum for Catalonian independence.

You don’t need to take a side on the question of Catalan independence, Si or No, to recognise that these actions are brutal, unmerited and authoritarian. This was nothing else but a state trying to subvert the democratic process its people demanded. A recent Catalan poll showed that 70% wanted a referendum held on the territory’s future (though only 41% supported independence itself), so it can hardly be said that the referendum was demanded by only a tiny extremist majority. No, the Catalan call for a referendum on its own future was perfectly legitimate. And even if, as do the Spanish state and courts, you believe that the referendum held in Catalonia is illegal, you will surely agree that it should never have come to this.

Beating civilians as they line up to vote and express a political preference on their own future is the kind of behaviour you might expect to see in Russia; there should be no doubt that Prime Minister Rajoy’s government has acted unacceptably and illegally. The UN said, before the vote was held, that “regardless of the lawfulness of the referendum, the Spanish authorities have a responsibility to respect those rights that are essential to democratic societies.” The Spanish authorities have brazenly ignored this demand. Furthermore, Article Seven of the European Union Treaty demands the “suspension of any Member State that uses military force on its own population”. There can be no doubt that the Spanish government has fallen foul of these two international institutions, with four thousand extra law enforcers (including the civil guard, who are a military organisation under the part-jurisdiction of the Spanish Defence Department) deployed to the region to forcefully prevent the vote from taking place, and nearly eight hundred civilians injured as they were beaten while trying to make their voice heard.

This response was totally unjustified. It had been widely accepted, including by the neutral United Nations, that the referendum was not a legally binding vote. Holding the referendum did not pose a serious or credible threat to the formal unity of the Spanish state: it could never have been much more than a gauge of opinion, much less a legally binding vote. A Si vote would not have led to the breakup of Spain; at worst, if the result was both credible and emphatic enough, it would have heaped pressure on the government to hold a new, legally binding referendum. But in of itself, this vote posed no credible threat. Therefore, the Spanish state had no cause to resort to such violence and suppression.

The outstanding question, therefore, is over what must happen now. The result of the vote itself is now even less credible than it was at the beginning of the day. It is clear that with at least 319 polling stations having been closed and with widespread voter suppression and intimidation taking place at the hands of Spanish state, the result of the referendum cannot be considered legitimate, whoever wins. The question of Catalonian independence will remain unresolved.

Also clear is that there must be consequences for the Spanish government. The EU, whose slow response and failure to unconditionally condemn the Spanish government has been shameful in itself, must invoke its Article Seven commitment to defend its people against the use of military force by their own state, meaning that Spain’s membership must be suspended. That Prime Minister Rajoy thanked the EU for their support in his defiant press conference on Sunday night should be a point of shame for everyone involved in the European Union – truly, they were on the wrong side of history on this occasion, but there is still time to put it right.

Secondly, Rajoy must resign or trigger an election, having ignored the United Nations, to prove that he still commands the confidence of the Spanish people. Refusal to do so will only confirm that he fears the power of free voters and the ballot box.

And finally, another referendum for Catalonian independence must be held in the near future: not only is it the unambiguous right of the Catalan people to decide their own future, which was denied to them on Sunday, this event represents a material change in circumstances around the whole independence question. After being beaten down as they tried to determine their own future, the Catalonian people deserve the opportunity to reach a verdict on their relationship with the state which tried to suppress them.

To conclude, we must all now pay our own homage to Catalonia. With such a proud, revolutionary history, as the centre of the republican movement against the fascists in the Spanish Civil War, Catalonia can once again hold its head up high today. We should revere those brave defenders of democracy who went out to vote on Sunday in spite of the police truncheons they had to face down in doing so, and those who dragged the injured to hospitals for treatment right from the middle of the maelstrom.

As Orwell said, “there are occasions when it pays better to fight and be beaten than not to fight at all”. Sunday’s attack on democracy was one of those occasions: we stand with those who fought.

PrevPreviousAusterity should be put back on the Menu
Next“Football ain’t a game anymore mate, it’s a business.”Next
On Key