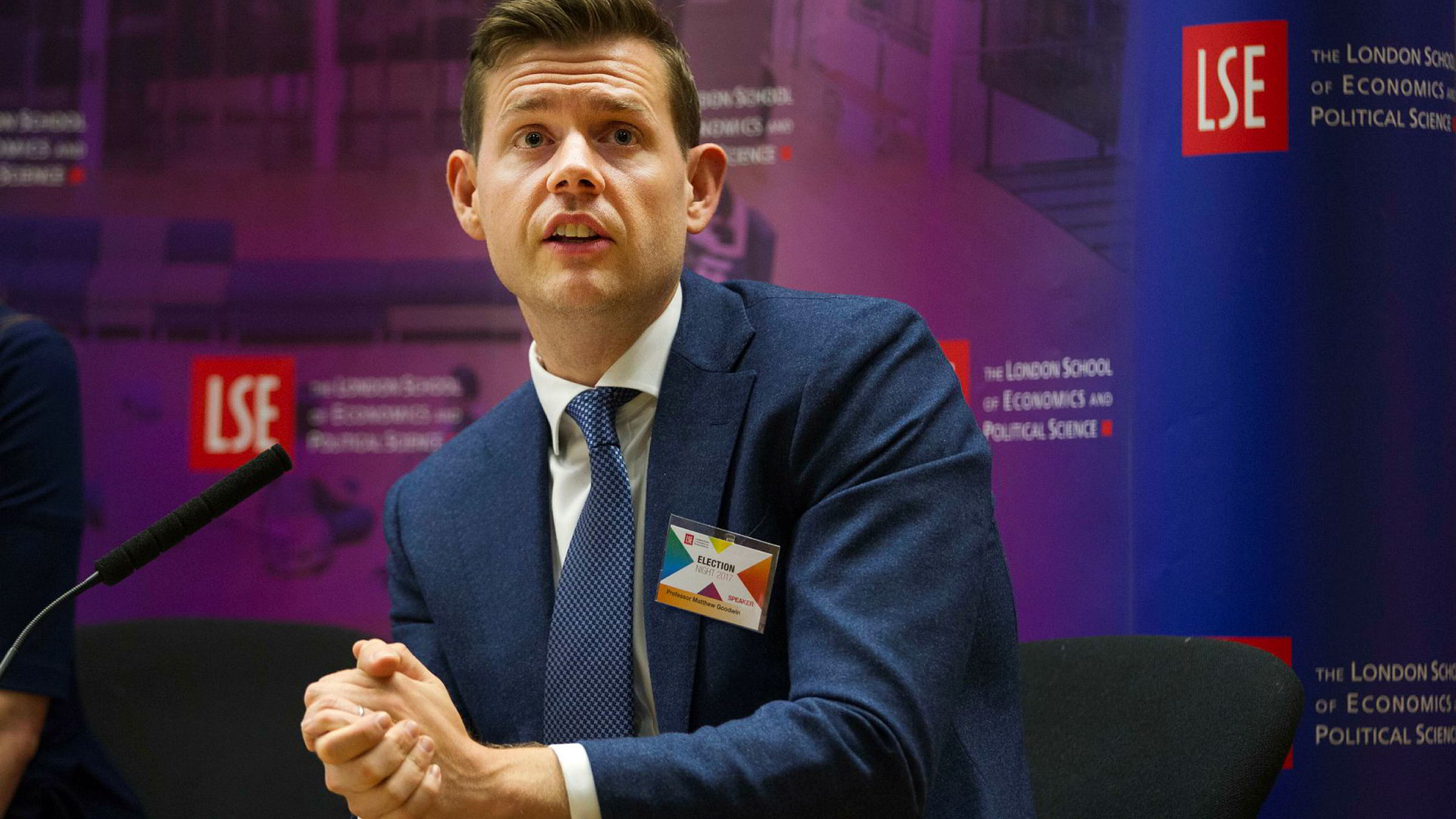 In 2003, when the UK Independence Party (UKIP) were on the distant fringes of British politics, a University of Salford undergraduate saw that right-wing populists had the potential for a national – even global – takeover. Fifteen years later, Professor Matthew Goodwin is one of Britain’s best known political scientists, and in his latest book warns that national populism could be around for years to come.

Rushing to make my appointment with the professor, I realise that my Greta Gerwig T-shirt and Urban Outfitters jacket don’t lend themselves to the typical student of right-wing populism. Matthew Goodwin’s point, however, is that appearances can be misleading. The findings of his new book, co-written with Roger Eatwell, support him.

Over a Diet Coke before his lecture, Goodwin explains how the decades-long growth of right-wing populism was so spectacularly missed by mainstream commentators, and why it continues to be misunderstood.

“It was always thought that Britain, with its elitist Conservative Party and a tabloid press that listened to people’s concerns, could never be the place for an anti-establishment revolt.”

Goodwin has become something of a national authority on the subject of right-wing populism, if only because he has spent so much time around it. He (with Rob Ford) won the 2015 Political Book of the Year award for ‘Revolt on the Right’, a two-year study of Nigel Farage’s fast-growing, anti-Westminster movement.

“In 2012 in particular, UKIP did really well in the local elections, replacing the Conservatives in key areas. So I wrote a book about it. Then Ukip won the European elections. And then Brexit happened.”

The professor’s habit to understate makes Brexit sound normal, unexciting. Was it inevitable?

“I think the fundamentals always favoured Brexit. We have a long Eurosceptic tradition, the issue of Europe had merged with the key issue of migration, and we had a strong populist movement that was adept at mobilising conservative Eurosceptics and blue-collar, working class voters who then became aware of the EU as an issue.

“And we had a Remain camp that, frankly, didn’t know what it was doing. That offered only a dry, transactional message.”

The professor’s analysis makes for grim reading, but his criticisms of a deeply flawed ‘Stronger in Europe’ campaign are hard to deny. It’s increasingly said that the centre-left lacks persuasive answers to major questions about the nature of globalisation, and how it can turn around a string of dire election performances throughout the West. Why have liberals struggled to adapt to the new politics?

“Liberals haven’t reflected on what happened in 2016, or thought about how we got here. They continue to prioritise liberal social values, while not realising they haven’t carried the country with them. They’ve not looked at what went wrong with the economic and social settlement they created.

“Liberals assumed the arc of history bends in their direction; we’re seeing changes among the young and the old that suggest that might not be the case. And with identity politics we’ve seen a complete inability to understand that people might have concerns about the changes around them, and that it’s not just bigotry or ignorance.”

Goodwin and Eatwell’s book often returns to similar criticisms of “distant and corrupt” political elites, more than happy to ignore citizens whose views are considered unsavoury. But some in the centre argue instead that today’s understanding of elites is a flawed one, and that greater problems lie in the miscommunication of real progress made in the last two or three decades.

“If this was a communications problem, it’d be a lot easier to solve”, Goodwin contends.

“Liberal democracy today has two major problems. One is the tradition of deep skepticism of the masses, which is now showing its face in attempts to overthrow the result of the referendum.

“This has been exacerbated by the second, which is the trend of the political class to move ever further from ordinary voters on issues like migration and cultural identities. It’s not a comms problem; it’s a growing discontent.”

And yet, as Goodwin and Eatwell acknowledge, it’s not necessarily the worst-off who’ve favoured right-wing populist movements with the most enthusiasm. During the Republican primaries, they note, the average income of a Trump voter was $72,000, far above the US average of $56,000.

What is more important to the salience of anti-establishment ideas, they argue, are feelings of ‘relative’ deprivation, an increasingly popular buzzword in political science circles used to describe voters’ disappointment or resentment toward the new economic and social status quo. If these voters are still relatively affluent, I counter, why should political parties pander to their expectations of social superiority?

“What unites a lot of the groups voting for anti-establishment, populist parties is the idea that their sense of community and position in society is in decline; I don’t think that’s a proxy for racism or white privilege. I think it’s a genuine sense that both the scale and pace of the changes around them have become bewildering.

“I think we should be spending a lot more time thinking about how we can create a national narrative or experience that genuinely focuses on what brings us together, rather than giving endless groups recognition or victim status. I think most people want a national community, something to be part of.”

It brings to mind the England football team’s recent adventure into the latter stages of the World Cup, which was credited with a summer uptick in national pride across the country. But there isn’t always an Olympics opening ceremony or a Royal Wedding for the English to unite around. Can today’s political elites really hope to create a permanent Englishness?

“I think our current generation of political representatives is very weak. We have a class of MPs who look completely lost amid the current social changes we’re going through.

“Across Westminster, there’s not much of a vision.”

Opposed to diagnosing from afar, Goodwin’s years of journeying the heartlands of right-wing populism have proved remarkably atypical for his field. Though he doesn’t always get it right, he feels his working class background and de Tocqueville-inspired approach have taught him invaluable lessons about politics and populism.

“I’ve never pathologised populist voters. In academia, they’ve often been seen as an aberration, as a problem to study because there was something wrong with them. It’s probably fair to say that a lot of colleagues operate in different circles and networks. I think in academia we need a lot more opinion diversity, when eighty or ninety-plus percent of them were die-hard Remainers.

Though Goodwin is critical of an office-bound academic world, he admits that political science has faced challenges outside the realm of academic journals and university campuses.

“I think we have to ask ourselves, Are we asking the right questions? Why didn’t we see Brexit coming, or Corbyn coming, or Ukip coming? Why are we always being outflanked by political change, when we’re the ones who are supposed to understand?

“You have to sit back and think: maybe our models aren’t right, maybe our theories work for the American Journal of Political Science, but they might have less to say about the wider world.”

Leaving the Kingsway coffee shop, the professor gets a media request from a Telegraph journalist. I tell him that sounds more like home turf: LSE is home to many Metropolitan Elitists, and even more Citizens of Nowhere.

But the audience in the Old Theatre is disarmed by Goodwin’s persuasion and clarity, rare for the genre. Right-wing populism is going nowhere, and liberals need new ideas. The country may be sick of experts, but this one could be on to something.