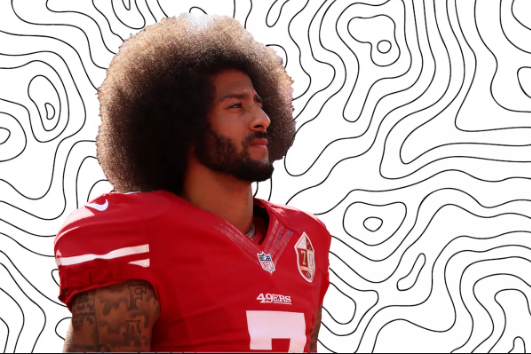 Modern Sport and the Endless Disarray of the Colin Kaepernick Situation

It is difficult to know where to start with a story upon which a book could be written. (I didn’t type another word for 24 hours after writing this). For the sake of structure, let’s have a recap.

In August of 2016, San Francisco 49ers quarterback Colin Kaepernick became a national figure when he decided to sit down rather than stand during the pre-match playing of Star Spangled Banner. In doing so, Kaepernick broke a tradition, defied prevailing patriotic values and thus, according to many, disrespected his country. The reasoning, in his own words –  “I am not going to stand up to show pride in a flag for a country that oppresses black people and people of color.” As numerous players joined the quarterback in this manner of protest, Kaepernick unsurprisingly grew to be a polarising figure glared at by the public eye. In the following weeks, Kaepernick’s became the top selling jersey at the 49ers official shop and yet, according to a poll taken at the start of the 2016 season, he was understood to be the most disliked player in the NFL.

Approaches premised on predisposed beliefs were taken; reactions from every corner of the spectrum were offered; and yet there seemed to be little general consensus on what to do, what to feel when one saw a player kneeling to the tune of the national anthem. Frank Serpico, (yes, that one), delivered a speech live on Facebook, before joining with other police officers at the foot of the Brooklyn Bridge in support of Kaepernick. Jim Brown, widely considered to be the greatest football player of all-time, explained, interestingly, that while he “wants to be in [Kaepernick’s] corner”, he would never “desecrate my flag and my national anthem.” So where do we go from here?

As is his custom with national news, President Donald Trump offered his opinion. In a series of elegantly written and considered tweets, Trump expressed his advocation of firing or suspending players who decided to kneel during the national anthem. “Tell them to stand!” he cried through his screen to Roger Goodell, commissioner of the NFL. The issue, in his eyes, was a lack of involvement by the relevant authorities – a perceived weakness in the NFL’s inability to enforce a punishment onto rogue and non-compliant public figures. A funny image just popped into my head of Trump ordering Roger Goodell to run onto the pitch and physically pull up every kneeling football player.

Moving on, early September of this year saw Kaepernick become the face of a Nike advertising campaign depicting an emotive picture of the quarterback set behind the words ‘Believe in something. Even if it means sacrificing everything’ alongside the company slogan (celebrating its thirty year anniversary) ‘Just do it.’ Nike executive Gino Fisanotti told ESPN that the meaning of this bold campaign was to bring light to the slogan for “a new generation of athletes.” Questions in my head began immediately – had Kaepernick been corrupted by fat cats waving a fat stack of cash in his face? Had big companies swum around like sharks the movement he so proudly professed to endorse? It is reasonable to suggest that, at least ostensibly, the campaign serves as little other than a depressing indictment of a growing corporatocracy. The backlash was immense. The story was pounced upon by all the various medias, travelling through the usual route of outrage to confusion, as well as meme-making, then to obnoxious broadsheet musings and finally, chip shop paper. To be clear on my position, I don’t believe that either party is truly guilty of committing a great crime. Kaepernick is being opportunist with regards to his activism and Nike has, as Ben Carrington and Jules Boykoff state, made a shrewd long-term business plan in latching onto prevailing beliefs within their core demographic of the under 35’s.

So what is it about this fascinating, very modern story that leaves such a foul taste in the mouth? It is, for me, the idea that activism is branded – that our heroes are seen looking silly and overly dramatic for the sake of advertising. Whilst I might not say that Kaepernick has done anything particularly wrong, he has, at least for now, lowered himself to the level of a conscientious conformist. I use that phrase because his efforts appear earnest yet misguided rather than wholly self-seeking. It is true that he has suffered immensely for exercising a basic right to political creed – this, alongside his initial rebellion should not be forgotten.  In that respect, I posit that it is best to remove oneself from this fleeting news story and return to the issue itself. Nevermind the question of whether or not Kaepernick sold out, we must not lose sight of the fact that activism, at its core, is fought on the streets, rather than in a Nike editing room. As far as I’m concerned, that is the only thing worth concerning oneself with, rather than indulging in the endless webs of confusion that surround this news story.

In an infantilised world in which I saw, the other week at the pub, a fifty year old woman playing candy crush on her phone, people seem to be more childlike in their susceptibility than ever before. With regards to news, it is very easy to be seduced into blaming individuals and thus fostering pointless anger. I suppose the conclusion I am trying to write is ‘be present and principled and don’t transfix upon pointless bullshit.’

PrevPreviousTotal Chaos: Hunter S. Thompson and Sport
NextAlbert Camus and Why Sport Matters – Berrylands as a HavenNext
On Key