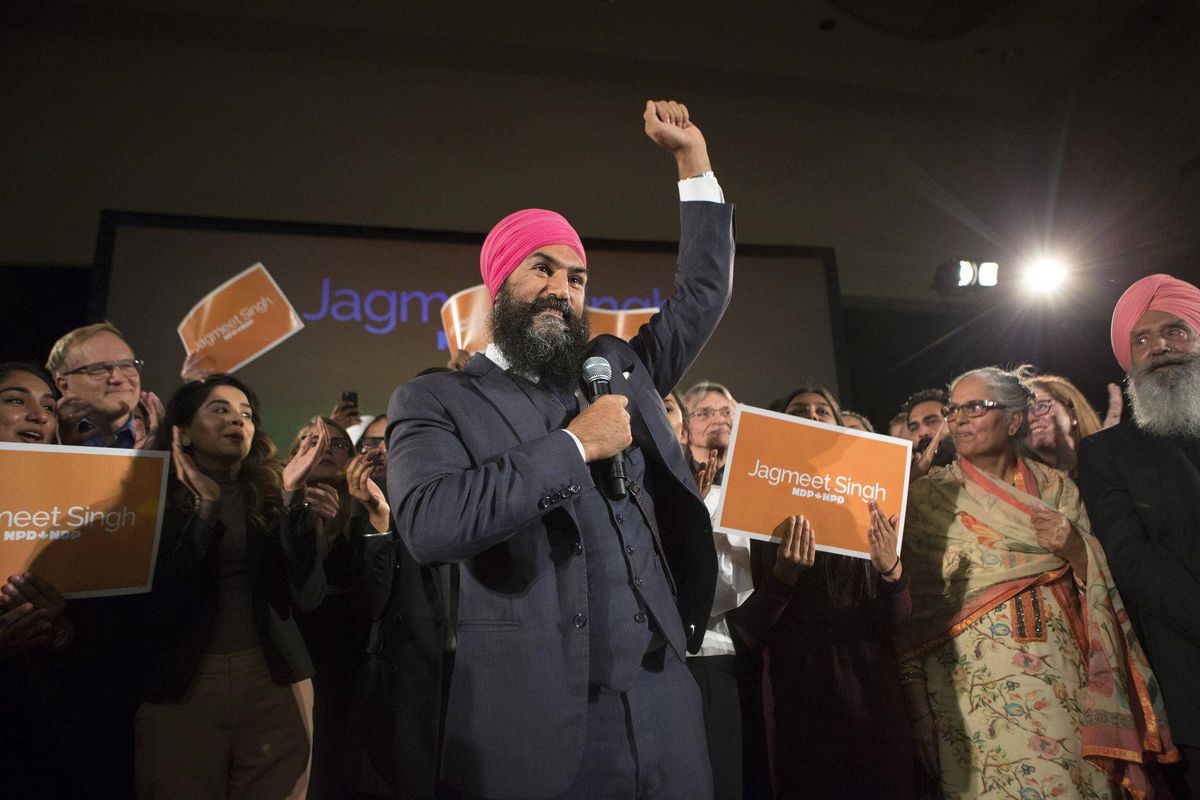 [vc_row][vc_column][vc_column_text]On October 1st, Jagmeet Singh was elected the leader of Canada’s New Democratic Party (NDP). Singh surprised political pundits and NDP members by winning a clear majority—53%—on the first ballot. Singh is now the leader of Canada’s traditionally left-wing party, and the tone he sets within his party will shape the next federal election in 2019.

Canada’s political spectrum is made up of the Conservative party, led by the Leader of the Opposition, Andrew Sheer; the Liberals, led by Canada’s Prime Minister, Justin Trudeau; and the NDP, now led by Singh. The NDP is Canada’s social democratic party and has traditionally been a voice for Canada’s left. In the last two elections, however, the NDP has shifted to the centre in an attempt to replace the Liberals as the nation’s major left-of-centre party by appealing more broadly. In 2011, due to both Jack Layton’s popularity and to a poorly-run Liberal campaign, this vision was partially successful; the NDP became the official opposition for the first time in Canadian history, relegating the Liberals to third party.

In 2015, after nine years of Stephen Harper’s Conservatives in government, the Liberals and the NDP staged campaigns to oust Harper and form a left-of-centre government. However, in the simplest terms, the NDP moved to the centre, and the Liberals campaigned on the left, leaving Canadians with a choice between two similar left-of-centre parties if they wanted an end to the Harper government. Only in the final weeks of the 2015 campaign did the Liberals gain momentum. On election night, the Liberals won an unexpected majority with the Conservatives as the Official Opposition and the NDP as Third Party.

Following the NDP’s defeat in 2015 as a result of a centrist-shift that much of its base did not support, the party held a vote of confidence for its then leader, Tom Mulcair. 52% of the delegates at the NDP Party Convention in 2016 voted to choose a new leader to replace Mulcair and to hold a leadership race within 24 months. At the time, this seemed to represent mobilization of the party’s grassroots in an attempt to renew the party as the party of Canada’s left.

Effectively, there were four candidates that stood for the party’s leadership: Charlie Angus, Niki Ashton, Guy Caron, and Jagmeet Singh. Angus is best known for his work on indigenous issues. Ashton, who had received nominations from the Democratic Socialist of America, is said to have had the most progressive platform of the four. Caron is from Quebec, the province where the NDP holds the highest proportion of seats and called for a basic income model geared toward low-income Canadians. Singh, having served as the Deputy Leader of Ontario’s provincial NDP, stood on a policy platform that would undoubtedly be considered to the left of the Liberal’s governmental policy, but is not dissimilar from the nature of the Liberal campaign promises in 2015.

In terms of optics, Angus and Caron are both middle-aged white men, who, apart from their accents when speaking English, are hard to tell apart if you don’t pay much attention to politics; Ashton is a 35-year old woman, who was pregnant throughout much of the campaign; and Singh is a 38-year old, spiffily dressed, turban-wearing Sikh man.

Singh won the leadership race on the first ballot with 53% of the vote. This came as a surprise due to the nature of a ranked ballot elections and four-way races. Polls aren’t all that helpful in terms of determining who will win ranked ballot elections, but Eric Grenier, Canada’s leading pollster, argues that factors such as Singh’s membership numbers—his campaign announced that they signed up more than 47,000 members, out of 124,000 members able to vote—and his fundraising capacity—Singh raised 53% of the money raised by the four candidates—were early indicators of his strong victory.

Singh’s victory is being celebrated in Canada and by international news organizations as a victory for the representation of people of colour, as Singh is the first person of colour to lead a Canadian political party. This coverage seems to conflate an important step forward in terms of political representation with racial equality in Canada. While the bar for white passing is lower in Canada than it seems to be in other countries, racial inequality is ripe. In Toronto, Black men are three times more likely to be asked for identification by police. The wage gap between white men and racialized men 81 cents to the dollar—68.7 cents to the dollar for first generation racialized men. It’s as low as 48.7 cents to the dollar for racialized immigrant women.

Even if the notion that Canada is a progressive haven is somewhat true for immigrants (particularly affluent ones), it is not true for the people whose land was stolen. Despite these stark figures, Canadians often compare themselves with the US, where racial inequality and political problems are far more apparent. Singh’s victory should be celebrated as a step towards political representation for people of colour. It should not, however, be allowed to perpetuate a sense of Canadian exceptionalism.

Singh’s election, combined with the election of Andrew Sheer as the new Conservative party leader, represents a centrist convergence in Canada’s political spectrum. As a result, the next federal election will likely be an election lacking substantive political debate. Instead, three cheery, 40- to 47-year-old men will be trying to win Canadians over based on fairly similar political stances and joyful personalities. Andrew Sheer, a merry social conservative who vows to leave his views on gay marriage and abortion asides to unite the Conservative party, will likely campaign on a fiscally conservative platform, criticizing Trudeau for the deficit and his tax reforms.

Trudeau will likely campaign to the left to recapture the centrist and soft progressives who got voted for him in 2015. He will point to his government’s successes, and argue that their shortcomings were a result of insufficient time. From his charisma to his youthful appeal, Singh seems to be a bit of a Trudeau lite. Singh’s platform will likely be similarly Liberal lite, unless the NDP’s left mobilizes and demands a strong leftist platform.

Singh’s victory does reflect the demographic importance of immigrants in Canadian politics. However, like Obama’s 2008 victory in no way brought an end to racial inequality in the US, the NDP’s new leader should not be understood to be a signal of a post-racial Canada. Furthermore, for the NDP to represent Canada’s left, Singh will have to champion real progressive policies, not play leapfrog with the Liberals to outflank each other.