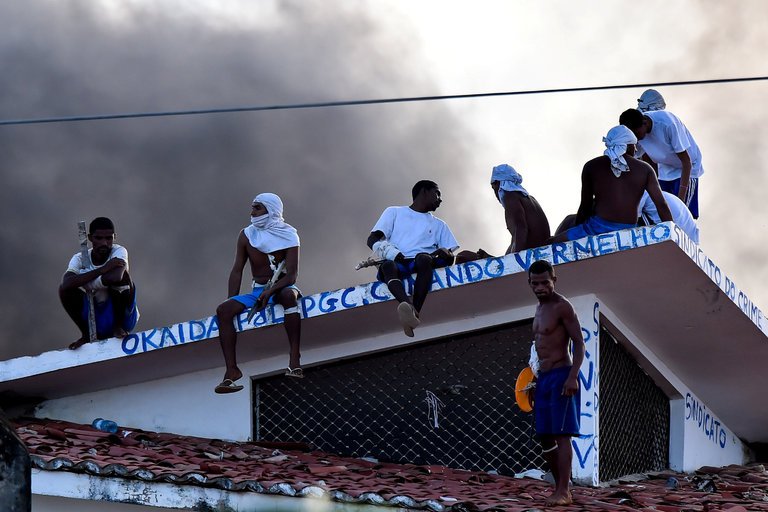 “We are all in hell. There is no solution, because we do not even know the problem.” These chilling words are those of Marcola, leader of the First Capital Command (PCC), Brazil’s most infamous drug gang. They were given in an interview to national newspaper O Globo in 2014, following a series of prison riots. Nearly three years on, his words have not lost any of their resonance.

The riot at Alcaçuz prison in northeast Brazil last weekend was the latest in a storm of uprisings that have occurred over the last month. An estimated 140 inmate deaths have been recorded since the turn of the year, including the 26 killed in the riot last week. Rival drug gangs, including the PCC, have hijacked prison facilities to conduct their own brutal turf wars over market influence, resulting in horrific scenes of decapitation and butchery. As this catastrophe reaches critical levels, the government must devise a radical strategy that not only mitigates the symptoms, but also tackles its causes, the roots of which run deep in the veins of Brazil’s criminal justice system.

One of the most significant contributors to the crisis, prison overcrowding has been a long-standing issue for many years. In 2014, the National Prison Administration (DEPEN) reported an average occupancy rate of 157%, with some recent studies suggesting that this figure could now be well over 200%. Despite the guidelines established by the National Council of Criminal and Prison Policy in 2009, that one guard must oversee no more than five inmates, official reports estimate this ratio to be anywhere from 1:10 to 1:30. Sociologist Camila Dias of the Federal University of ABC told Reuters last week that, in some São Paulo prisons, a single guard is tasked with the duty of overseeing as many as 400 prisoners. As a result, prisons are often forced to operate on a semi-formal basis, unable to enforce order amongst chaos. Combined with inadequate training as a result of insufficient government funding, this can often lead to prison guards going as far as to delegate responsibility to prisoners, or even allow prisoners to leave the facility during the day, provided they return for their designated work shifts.

This appalling state of affairs has, justifiably, attracted criticism from numerous human rights organisations, including Amnesty and Human Rights Watch. As the crisis continues to persist, President Michel Temer has announced plans to build a further 30 prisons over the next year to help ease the issue of overcrowding. This comes as part of the government’s new National Security Plan, which also includes measures such as the introduction of metal detectors in order to assist in preventing weapons smuggling. Moreover, following the events last weekend, the government announced on Tuesday that it has ordered the deployment of military troops in prison facilities across the country, attracting disapproval from those who feel that these soldiers are ill prepared for combatting the strength of organisation that exists within the ranks of the drug gangs.

For many, the government’s proposed reforms are unsatisfactory. Amnesty International has criticized the plan for failing to specifically address human rights issues such as prisoners’ access to healthcare and regular meals, calling the proposals “too broad”. While some would argue that this does not warrant immediate attention given the crisis at hand, conditions in Brazil’s prisons have been under scrutiny for many years. The government has also come under fire for failing to claim responsibility for the crisis, with Temer referring to the riot in Manaus on New Year’s Day as a “terrible accident”, blaming the private company that owns the prison rather than addressing policy flaws. Further financial investment to help improve these conditions is, however, unlikely. Over the last two years, funding for prisons has been cut by 85%, and with a cap on public spending for the next 20 years following Brazil’s recent economic downturn, chances of any significant prison reform are minimal.

An alternative strategy, then, is to tackle the issue at its root – the criminal justice system. As many as 40% of Brazil’s prisoners are still awaiting trial for their actions, with the government attracting criticism from those who see the current sentencing procedures for drug crimes as far too draconian. Many argue for a more liberal approach to minor offences, in order to help reduce the intake of prisoners and tackle overcrowding. Human Rights Watch (HRW), in a report released in the midst of the crisis two weeks ago, condemned the 2006 anti-drug law for its legal ambiguity, and its contribution to the current crisis. Maria Laura Canineu, director of HRW Brazil, described the law as “vague”, not discriminating between users and traffickers and hence imposing unfair sentences upon those who do not deserve them. She also attacked the state for escaping responsibility. “The government treated this tragedy as if it was unforeseen. This is absurd”. In an article for the New York Times two weeks ago, Robert Muggah, a specialist in drug policy, argued that possession and use of drugs should be “decriminalised” in Brazil. “The fight against drugs will fail if it’s reduced to eradicating drugs production and seizing drugs”.

Whatever policies are pursued to mitigate the symptoms of this crisis in short term, the causes of the problem are deep, varied and complex. The government cannot afford to continue to administer short term, Band-Aid measures and hope that it will be enough. Responsibility for failed policies must be claimed where it is due, and a radical overhaul of the Brazilian penal system embraced. If the nation has any hope of proving Marcola’s victory claims false, it must engage fully with the debate at hand.