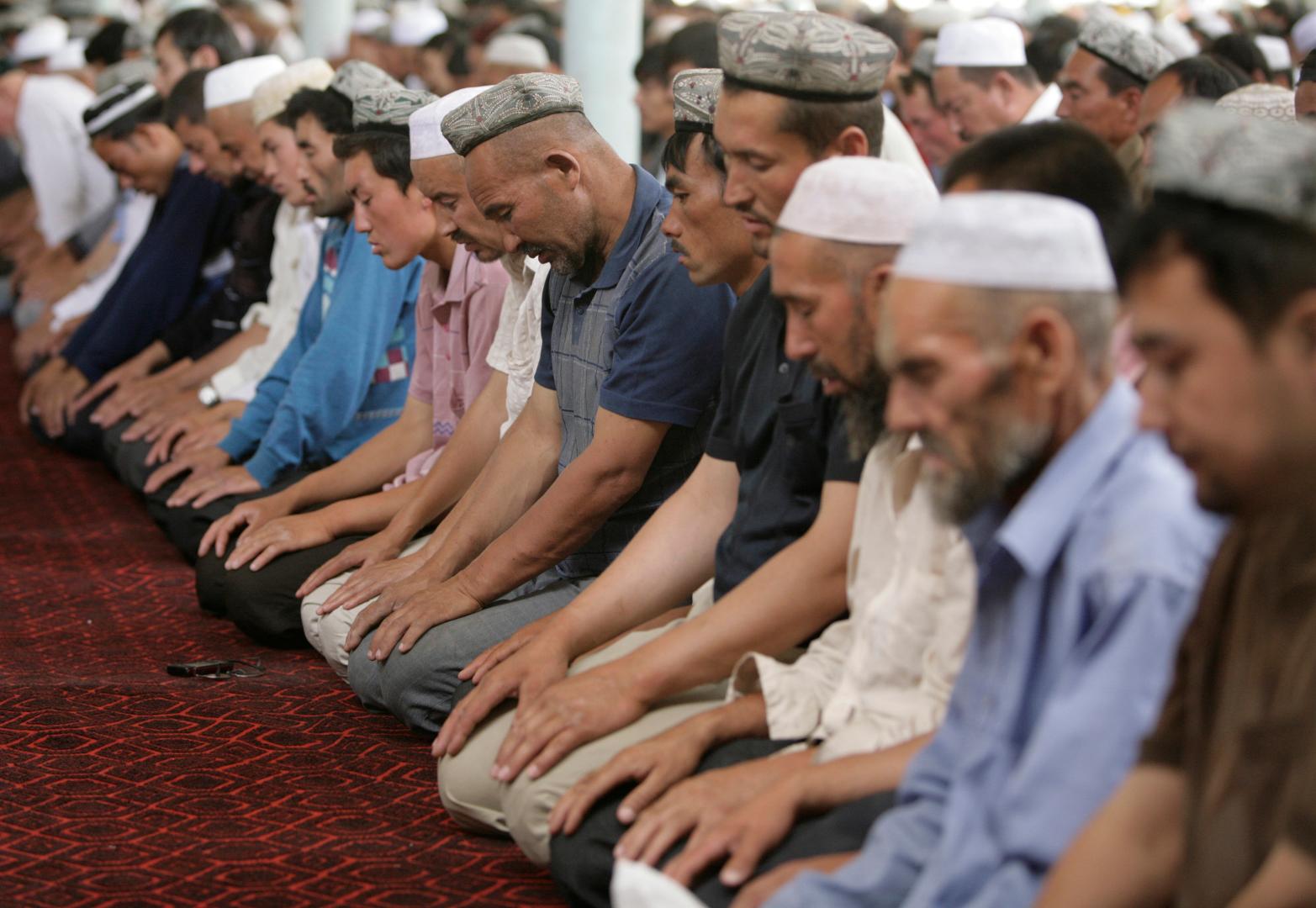 Something Wicked This Way Comes – Sinofication and Biopolitics in China’s Internment Camps.

It’s Friday the 25thof January, approximately 4 pm and on the 6thfloor of the old building a group of academics gather in the anthropology library for a round table discussion of the ominously named ‘Political Situation in China’. Their amiable dispositions and friendly banter masks their serious – and growing concern – over the political developments in the Xinjiang province of China. I’m of course referring to the internment, or re-education camps, that are currently housing over 1 million Chinese Uyghur Muslims.

Since summer 2017 unsettling reports have emerged of the mysterious disappearance of  Uyghur Muslims across the Xinjiang province of north-western China. Whilst these reports were initially met by silence on the part of the Chinese government, the emergence of satellite imagery, and determined efforts by western media outlets to shed light on the plight of the Uyghurs, has finally led Chinese state officials to acknowledge the existence of certain “education and training centres”.

The creation of internment camps under the guise of fighting radical Islamic terrorism though ‘re-education’, represents a deeply troubling development in what was already an acrimonious relationship between the Uyghur majority and the state backed Han minority living in Xinjiang. According to what limited information is available, due to the media blackout in the region, ‘re-education’ involves anything from: forcing Uyghurs to eat pork, to cutting off men’s beards, to beatings, and reports of Uyghurs being forced to sing patriotic songs till they pass out.

This reign of terror, unfortunately, is by no means limited to imprisoned Uyghurs. On-the-ground observers like anthropologist Darren Byler has drawn attention to the fact that the Chinese state has mobilised over 1 million Han Chinesecitizens to take up the role of ‘siblings’ and ‘family members’ in Uyghurs households in an effort to extend state surveillance into the home of every family. In a recent paper by Joanne Finley, published in the Central Asia Survey, there is even evidence of state officials sleeping in the bed of Uyghur families and feeding their children, leading one observer to notehow ‘‘Muslim families across Xinjiang are now literally eating and sleeping under the watchful eye of the state in their own homes’.

Meanwhile the academics gathered in the anthropology library, agree that this represents a structural shift in Chinese policy towards minorities and religious groups in the country. They wonder whether this is perhaps a way of sending a message to other religious minorities in China as if to say – ‘accept limits imposed on religious practice by the state, or face the Uyghur treatment.’ This comes in the wake of a recent Communist Party crackdown on Chinese Christians and its purported intimidation of the country’s small Jewish minority.

However, the internment of over 1 million Uyghur Muslims represents much more than simply a structural shift in policies towards minorities in China. In order to understand its full significance we need to situate growth of ‘re-education’ camps as part of a historical project of sinofication. Sinofication – the creation and assimilation of non-Han Chinese people into the Han Chinese cultural tradition – is a policy with a long history in China in general, and the Xinjiang province in particular.

Xinjiang – literally meaning ‘new territory’ – has always been viewed as somewhat different to the rest of China and successive regimes have tried to bring the semi-autonomous region under Han-Chinese influence. Not only do Uyghurs look different to Han Chinese (they are a Turkic peoples), but in comparison to the economic development of the rest of China, Xinjiang province has lagged behind. Dr William Matthews, an LSE fellow in the anthropology department, notes that “sinofication is firmly situated in a discourse of cultural/ethnic nationalism” which “fits into a larger nation building project”.

In this way, the discourse of Sinofication is part of a wider narrative of socio-economic development whereby Uyghurs must be made to be more Chinese and ‘catch up’ with the rest of the country. This has in recent years become an even more urgent enterprise considering the instrumental role the Xinjiang province plays in China’s Belt and Road initiative.

However, whilst both Sinofication and ‘re-education’ camps – a surprisingly stubborn relic of Mao era policy in from the 1950s – are nothing new in themselves, it is worth considering the alarming turn they are taking with regard to China’s Uyghurs. Whereas efforts at ‘re-education’ in the recent past have largely beendirected at drug addicts, in which case it was at least possible for the Communist Party to claim that they were treating people suffering from serious ailments, in the case of Uyghur Muslims something far more sinister and fundamental is afoot.

In toeing the party line, and simply calling the internment camp ‘re-education centres’ we’re playing into the hands of party officials and obfuscating the true purpose of these camps: the elimination of Uyghur cultural and ethnic identity. Observers have noted how China is increasingly referring to Uyghurs as a biological threatto the Chinese body politic. In 2017, for example, the Khotän Prefecture government published a paper entitled ‘Transformation through Education Classes Are Like a Free Hospital Treatment for the Masses with Sick Thinking’.

Furthermore, a recent paper by Associate Professor Sean Roberts of George Washington University, traces the roots of China’s biopolitical discourse of radicalisation back to the Global War on Terror (GWOT) in 2001. He not only argues that the China’s labelling of Uyghurs as ‘terrorists’ has become a self-fulfilling prophecy, but that the label of ‘terrorist’ conjures up an image of a viral threat to Chinese society that must be separated, quarantined, and eventually eradicated lest it contaminates the whole Chinese body politic. This discourse conflates the category of ‘Chinese Muslim’ with ‘terrorist’, and identifies Uyghur as a threat to China’s socio-economic development and nation building project.

It is important to note that this is cultural and ethnic project – there is no evidence that the party state is systematically killing Uyghurs, yet. Any attempt to account for China’s crackdown on the Uyghurs has to account for their significant investment in re-education. To this end, Dr. Matthews notes how the “The Communist Party sees itself as the custodian of Chinese culture”, and although sceptical of overly historicising explanation, notes how China has historically pacified its border regions by encouraging sinofication and Han-Chinese settlement. Perhaps certain parallels can be drawn to what we’re seeing today.

Worryingly, at the round table discussion on Friday, there was a consensus that one reason why these camps have received so little attention is because foreign observers and specialists on China are afraid to speak outfor fear intimidation and losing visa rights. This follows reports of the recent disappearance of academics in China, who are the latest to join a list of 56 Uyghur lecturers and researcherswho are known to have vanished in recent months.

Sinofication also means standardisation. Observers have already noted how China’s securitisation drive has helped turn Xinjiang Province into the most heavily fortified and surveilled region on earth.This is part of a drive to render Chinese society as a whole more legible, and as society becomes more legible The Communist Party’s biopower grows. Ordinary citizens are thus increasingly disciplined to fit certain normative notions of the ideal Han-Chinse citizen. But certain citizens – in particular China’s 11 million Uyghurs – clearly do not conform. Their faith, and their record of socio-economic development in the Xinjiang Province is a blotch on China’s understanding of itself, and more importantly a threat to their future plans for economic development. It is clear that Uyghur cultural and ethnic identity simply have no place in President Xi’s vision of China’s future.

As Dr. Matthews bleakly explained “this is a project to within one generation destroy Uyghur cultural and ethnic identity”.

As I got up from my seat to leave the discussion I thought to myself that history will not look kindly upon us if we remain silent to the plight of the Uyghurs. But more eerily, I found myself reminded of Philip Gourevitch’s brutal aphorism:“Genocide, after all, is an exercise in community building.”

PrevPreviousMaking Bob Marley: The Strife That Shaped a Legend
NextA Response to ‘Preston on the Catalan Conflict’ by the Foro De ProfesoresNext
On Key