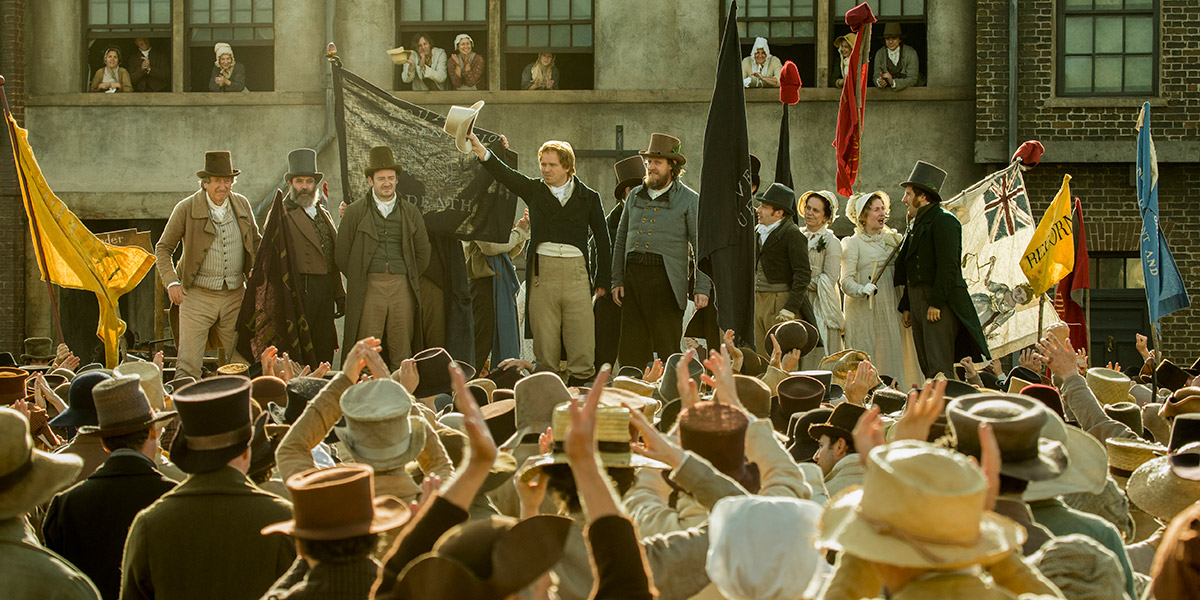 Why is “Peterloo” so bad? Day one at TIFF

A masterpiece, two festival favourites and a turkey on opening day at Tiff 2018.

My day one schedule:

This is a hugely impressive directorial debut from Paul Dano, best known for his acting in art-house favourites such as “Little Miss Sunshine” and “There Will Be Blood”. When a newly unemployed father (Jake Gyllenhaal) and a stifled housewife (the excellent Carey Mulligan) face troubles in their marriage, their whip-smart son Joe (Ed Oxenbould) gets caught in the wildfire. “Wildlife” benefits from a quick-witted script co-written by Paul Dano and Zoe Kazan (“The Big Sick”), adapted from the novel by Richard Ford. The best lines will follow you out of the cinema, aside the film’s distinctive 1960s aestethic.

From celebrated director Olivier Assayas comes this delightful ensemble comedy about the exploits of a failing novelist, his publisher and their cheated-on wives. It’s French, so expect sex, smoking and good food in every scene. As well as Juliette Binoche, of course, pitch-perfect as an actress sick and tired of her crude cop show, with mysteries of her own. A feel-good film with lots of calibre.

Where to start with “Burning”, the Korean mystery-epic about a boy who falls in love – only to see his life, and those around him, hijacked irreparably. Break-out performances from Yoo Ah-in and Jeon Jong-so dominate proceedings, but Steven Yeun graduates from “The Walking Dead’ spectacularly as the shady Ben, a twenty-something with dark money and darker secrets. Once in a while a film comes along which is so depraved in its content, yet so masterful in its craft, that it makes you smile. Gasping was what most of us did, though, provoked even by the most innocuous moments thanks to Lee Chang-dong’s Hitchcockian claustrophobia. We could be watching this one in decades.

Some filmmakers enjoy such a level of industry reverence that they can make pretty much whatever film they like. Mike Leigh, who made his name in the 1970s with a series of TV films portraying the grit and grisliness of British postwar life, can certainly be counted within such a group. But it’s that prestige, and the sort of carte blanche it lends its to lucky few, which probably explains how the turgid “Peterloo” was green-lit and, ultimately, why it’s as bad as it is.

The main problem, which will surely horrify even the most loyal Leigh devotee, is the script. Written solely by the film’s director, “Peterloo” never gets off the ground, opting for the tone of a costume drama pilot episode where more urgency felt necessary. A passable opening 30 minutes ambles and stumbles toward some sense of plot but leaves much to be desired, one-dimensional characters and convoluted dialogue on full display. The film is overtly political – a generous critic might say timely – but that can only excuse so much of the grandstanding and pomposity that pervades through “Peterloo”. It’s got all the excitement of a Labour NEC meeting, and produces about as much.

In truth, Fellini in his prime couldn’t save a script like this, and it quickly becomes apparent “Peterloo” – and its unfortunate audience – will fall victim to 150 minutes of elliptical conversations, terrible accents and school nativity-standard costumes. Talk about a massacre.

Ultimately this film simply shouldn’t have been made, or should have had a much more critical eye than that of its sole creator. Next time Amazon Studios – and the BFI – commission such an immature retelling of British working class history, they should think again. My advice? Read it on Wikipedia. I’m going to bed.