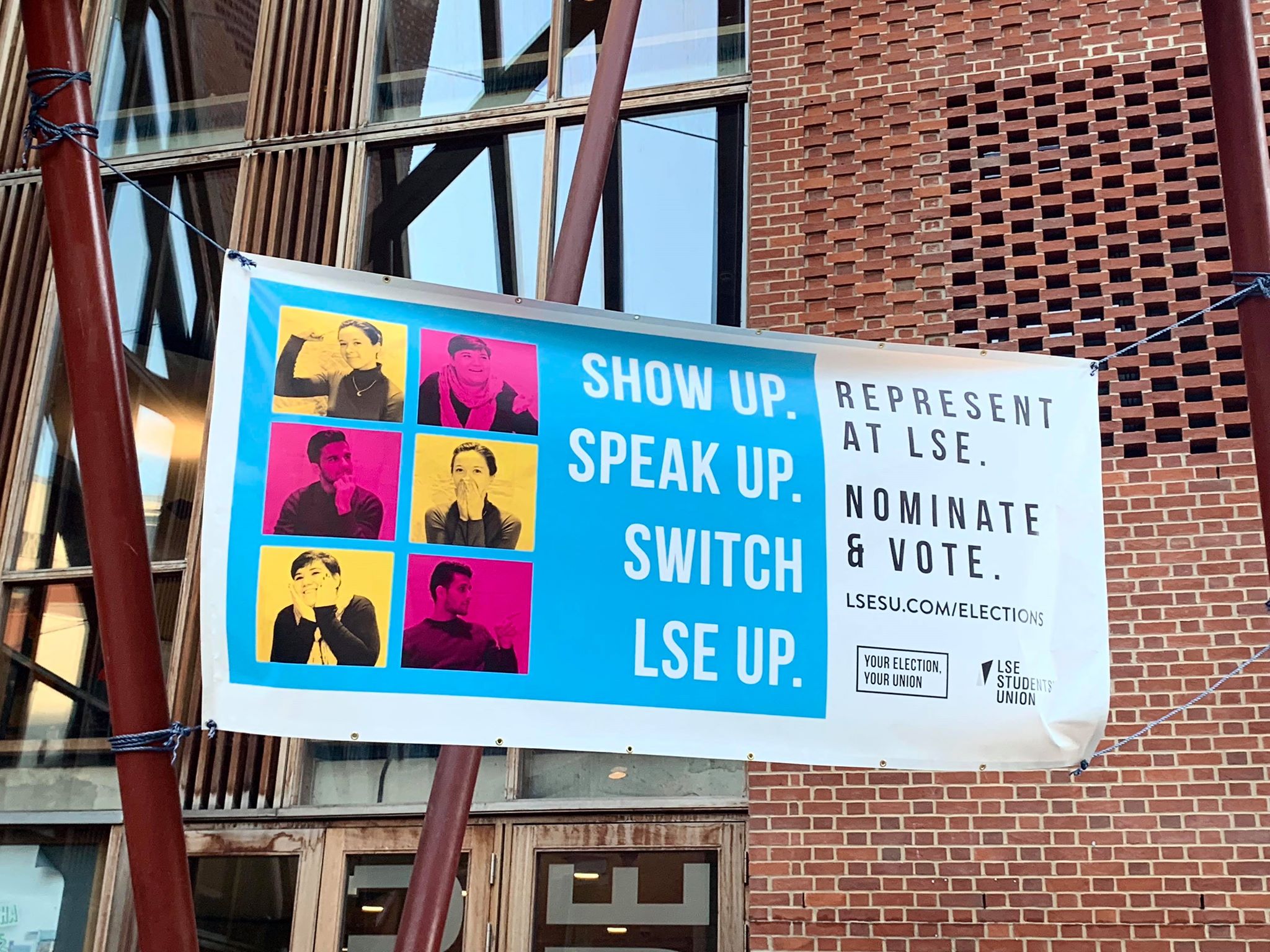 We need to scrap elections to save the SU

LSE has a problem. Our students’ union doesn’t represent the wider student community. While the majority of students are women, 75% of sabbatical officers are men, and every GenSec elected while I have been a student at LSE has been a man. Furthermore, all of our newly elected sabbatical officers are undergraduate students who lived in the UK before coming to the School, while our university that is both majority postgraduate and international. Something is deeply wrong with the way our democratic institutions are functioning.

While underrepresented groups have often fought for and won liberation officers, these part-time roles by themselves haven’t been successful in ensuring different groups are adequately represented by student leadership and their lack of resources means that they can find it hard to achieve their manifesto pledges. Furthermore, the creation of liberation officers doesn’t necessarily lead to improvements in the diversity of sabbatical officers, especially if candidates who would have run for a top job are pushed into running for a liberation role instead.

Another potential solution to the SU’s lack of representation is to increase voter turnout. That’s why the SU attempted to bribe societies this year with an £100 dinner if they were able to get 80% of their members to vote, however only Dodgeball, Women’s Rugby, Men’s Rugby and Netball achieved this. The implicit argument is that a wider variety of groups will be represented on the SU if a wider variety of people turn out to vote in SU elections.

The big problem with that reasoning is that you need a greater variety of people to stand for the most important elections in the first place, so that underrepresented groups can vote for them. Take the GenSec election this year: in a race of seven, only one of the candidates was a woman. Moreover, Zulum was the only candidate who wasn’t white and there were no Asian candidates at a university where Asian students make up around a third of the undergraduate population.

The fact is that we all know what’s wrong with SU elections: they’re popularity contests. The people who do vote, typically vote for their friends. Turnout is also significantly higher among third-years with 39% of third-years voting in this election, compared to 26% of second-years and almost 19% of first-years.  This is because older students are more likely to personally know one of the candidates. We rarely look at the candidates’ manifestos, and if we happen to think that somebody who is running against one of our mates has better policies, we’ll probably still vote for our mate. And because people vote for their mates, groups that can get the vote out, such as the Athletics’ Union, are usually better represented in the SU.

The friend group you are a part of not only affects your ability to win votes, but also your likelihood to stand for election in the first place. In a 2015 paper published for the Journal of Youth Studies, Brooks et al. show that whether or not a person is encouraged to run by their mates is a highly significant factor in their decision to run, and certain groups are more likely to encourage their friends to run for election than others.

This might not be such a big issue if friend groups were mixed on campus, but the fact of the matter is that people tend to become friends with people of their own age, class and ethnicity. In some ways this is understandable: working class students can, for example, find it difficult to integrate with middle class students because they lack the economic or cultural resources to do so. International students often mix with each other, but not necessarily with home students, again in part because of differentiated social resources. Many postgraduate students are also unable to mix with other students at all outside of seminars and lectures because of commitments outside of their studies.

This homogeneity of social groups leads to poor representation in the SU when some groups become disconnected from SU politics. Brooks found that on many campuses people in groups that were mostly made up of international students were often discouraged from running in elections. In part, this is because there is a lack of role models available to people from these groups. Certain groups can also become disconnected from wider SU politics because the culture of the ‘inner’ SU can be off-putting. For example, a strong drinking culture is understandably off-putting to many mature students. These are just some of the ways that a perpetual cycle of discrimination can emerge.

Getting people from underrepresented groups to stand for election isn’t a problem unique to students’ unions. Parliaments across the world fail to elect enough women. To overcome this, parliaments or political parties can adopt gender quotas. In the UK the Labour Party’s use of All Women Shortlists means that 45% of its MPs are now women, compared to 20% of Tory MPs. The Labour Party continues to elect mostly men where it doesn’t use All Women Shortlists: the vast majority of Labour’s elected mayors and Police and Crime Commissioners are still men, and the party has never elected a female leader.

The problem with quotas however is that women are not the only underrepresented group in the SU. If we say that at least 50% of sabbatical officers should be women, should we also set quotas for underrepresented ethnic groups? While two of our elected sabbatical officers are black, does that mean that other non-white ethnic groups are being satisfactorily represented on the SU? How often should we adjust our quotas so that when the size of different groups change, their representation also changes? Should quotas go beyond race and gender identity so that more than 50% of sabbatical officers are postgraduate students? What about different academic departments and SU societies – should they be proportionately represented too?

These issues all go away if we just give up on trying to adequately represent the diversity of our student population with elections and move to a much simpler tool: the random lottery . Let’s make the SU a genuinely democratic organisation, in the Ancient Athenian sense of the term.

Imagine if instead of a GenSec, a Community and Welfare officer, an Education officer, an Activities and Development officer, plus various different Part-Time officers, we randomly choose twelve or so students each year to represent us as part of a collective non-hierarchical SU committee. Because positions would be determined by chance rather than popularity, more than half of the committee would usually be women, more than half would usually be international students, more than half would usually be postgraduates, and roughly half of the committee wouldn’t be white. Furthermore, you’d have people in student leadership roles who would have never stood in a student election – normal people, who don’t spend all their time in student politics.

In my opinion, if we choose representatives by lottery SU campaigns would start to cater to a much wider variety of people, and more people would get involved with the SU as a result. Imagine a postgrad-led SU campaign for the university to provide free childcare in the LSE Nursery for students with children. By increasing the diversity of our SU leadership we could make the SU a lot more relevant to a much greater number of LSE students.

Not only would the SU represent a greater diversity of students, but the collective SU body would make better decisions than our current student leadership as a result. The average representative would have roughly the same level of ability as the average LSE student to do the job (and let’s not forget that the average LSE student is very clever). Now you might argue that our representatives should be smarter than the average student, but according to political scientist Helene Landemore, as a collective body a randomly selected group would more often than not make better decisions than representatives elected on merit. This is because their greater diversity, not only in background but also in the ways they would approach solving problems, would mean the SU would more easily avoid the pitfalls of groupthink. It can be beneficial to not only have ‘natural’ leaders making decisions, especially when ‘natural’ leaders are almost always men.

Across the world, in parliaments and student organisations alike, elections are facilitating the hoarding of power by certain elites. This is not something that can be fixed because there will always be a divide between the sort of people who choose to stand in elections, and the sort of people who don’t. Yet involving this latter group in our decision making is vital to ensuring that the SU works for everyone. Increasing turnout can never adequately address this problem. It’s time to get radical. Let’s go random.